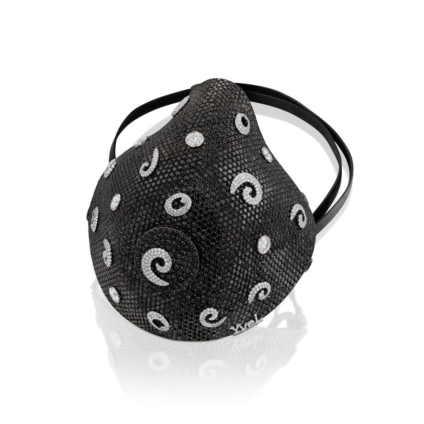 Made of gold and diamonds, this is a fully functional protective face mask

When the coronavirus pandemic first emerged earlier this year, Isaac Levy found himself in a place that many business owners were in, looking for orders to keep his business operating.

Levy, owner, and co-founder of Yvel, an Israeli luxury jewelry brand best-known for creating jewels made of baroque pearls, has a workforce of about 150 persons in Israel and the U.S.

This includes craft persons from Ethiopia who were trained at the Megemeria School of Jewelry & Art at Yvel’s factory outside of Jerusalem.

The school is funded by the company to train Ethiopian immigrants in jewelry making skills. Overall, about 90 percent of Yvel employees are immigrants from 23 countries.

In his travels in the U.S. to drum up business, a client and friend, described by Levy as a Chinese businessman and art collector living in Los Angeles, came up with the idea of producing a one-of-a-kind bejeweled protective facemask.

“He’s an old customer of mine,” Levy said in a phone interview.

“He’s known Yvel since 2008. He’s visited us in Israel and knows what we do; including the school my wife (Yvel co-founder, Orna Levy) and I dedicated for Ethiopian immigrants.

“We don’t take donations for the school. When things turned backwards this year he said ‘let me give you an assignment to create something with a lot of buzz.’”

The client, who requested anonymity, had three requirements for the bejeweled mask:

* It must be 100% functional and N99 compliant with approvals from the U.S. Food and Drug Administration and the European Union;

* It must be delivered before December 31; and

* It would be the most expensive protective facemask in the world.

Levy said the last requirement was the easiest to fulfill. The other two requirements represented challenges. Another challenge was making a mask of precious materials comfortable to wear. He said he was prepared to meet these obstacles.

“In this business if you don’t have a challenge it’s not fun,” he said. “It was a very nice project, interesting and rewarding.”

Levy recruited 25 of the company’s top artisans and diamond setters to carry out the assignment, including three persons from the Megemeria school.

They worked for three months on the project.

The result is a fully functional $1.5 million mask in a mesh-like design by Levy. It’s made of 250 grams of 18k gold and is set with 3,608 natural black and white diamonds, with a total weight of about 210 carats – which Levy says makes it the most expensive mask in the world.

That’s unofficial but no one else has come forward with a similar claim. It weighs nearly nine ounces. The mask is made with an opening to insert a disposable N-99 mask.

The mask is completed and is in the process of being delivered.

Levy stresses that the importance of this project is that it kept the Yvel factory in operation and even offset the pay of those employees who are still unable to return to work.

The Israeli government has been paying 50% of employee salaries while they are unemployed due to the global pandemic.

The money made from the mask paid the balance of those salaries. Levy called it a Hanukah miracle.

“I think it’s very important to understand that it’s not about making another buck,” he said. “I have a lot of appreciation for this gentleman who understood the needs of the employees of Yvel. I think this is what partnership is all about. Reaching out when someone needs a hand and he reached out to us.”

Levy isn’t sure if the person will actually use the mask.

“He’s an art collector and I think he bought this mask as a piece of art. Maybe he’ll use it. I think he may eventually sell it like other art objects he owns.”

While Levy said he was happy to have this project, would he do it again?

“I hope not. That’s not my initial ideal of a fine jewelry brand to make high jewelry masks. I’m happy just to make that one-of-a-kind mask, sell it, and move on. What happened was just a coincidence.”