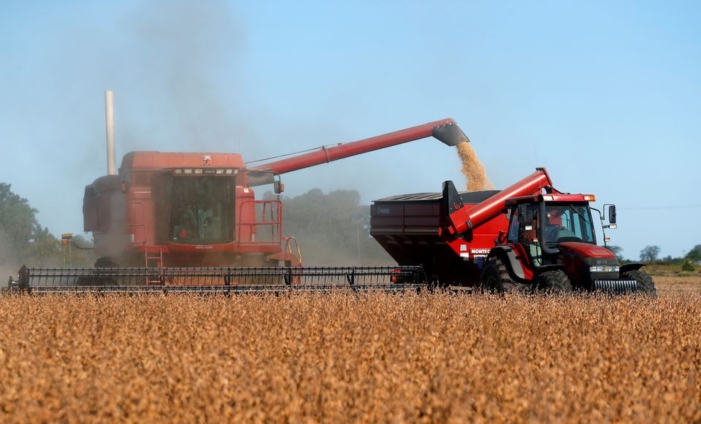 A combine harvester is used to harvest soybeans on a farmland in Chivilcoy, on the outskirts of Buenos Aires, Argentina April 8, 2020. REUTERS/Agustin Marcarian

Argentina, the world’s top exporter of soyoil, is unlikely to be able to take full advantage of record prices, exporters and analysts said, due to drought hitting the soy crop, a recent export tax hike and subsidies to keep domestic prices low.

“There is going to be an impact on international prices, which is good news for Argentina from that point of view,” Gustavo Idigoras, head of Argentina’s CIARA-CEC chamber of grains processors and exporters, told Reuters.

“But it is bad news for the domestic market,” he added, explaining that the industry would have to pay “additional subsidies” as part of an agreement to keep local prices down.

Argentina, the world’s top processed soy exporter and the no. 2 shipper of corn, has a number of mechanisms including export quotas to rein in domestic prices. Annual inflation is running at above 55%, driven by food costs.

The government recently hiked the export tax rate on soyoil and meal to 33% from 31% previously, part of a package of measures to bring down domestic food inflation.

Agustín Tejeda Rodríguez, head economist at the Buenos Aires grains exchange, said the ban by Indonesia could open up an opportunity for Argentina

“Argentina could capture a greater proportion of world demand by supplying countries that depend on palm oil from Indonesia,” he told Reuters, adding though that tax hike and drought earlier in the year would limit the opportunity.

“There is lower availability of soybeans this campaign to supply the soybean crushing industry.”

Argentina’s 2021/22 soybean harvest, currently underway, is estimated at between 41-42 million tonnes, though was sharply lowered after dry weather hit crops at the start of the year.

Rosario grains exchange analysts Emilce Terré and Tomás Rodríguez Zurro said in written responses to questions from Reuters, that the country’s soy crushing in March had been 2.93 million tonnes, 14% below the same month a year earlier.

“In this context, the commitment of shipments of Argentine soybean oil to date, with 305,100 tonnes to be shipped between April 20 and May 10, is 25% behind what had been recorded by the same date last year,” they added.