The Ministry of Food and Agriculture (MoFA) has triggered interventions to contain Fall Army Worms (FAW) which have resurfaced in some parts of the country.

The Director of the Plant Protection Regulatory Service Directorate (PPRSD) at the ministry, Dr Felicia Ansah-Amprofi, said MoFA had noted cases of the worm attacks on crops across the country.

She said it had dispatched enough quantities of 13 approved chemicals to its extension officers in all regions and districts to help farmers tackle the challenge head-on. 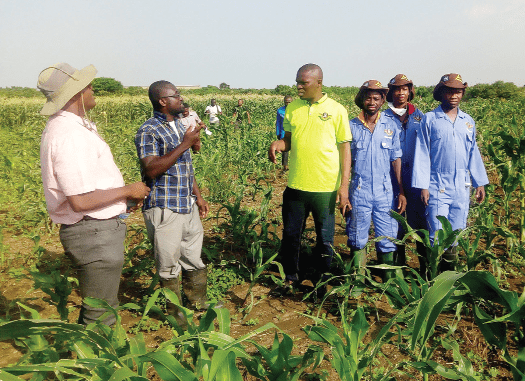 “We have distributed a total of 79,560 litres of liquid chemicals and another 20,665 kilogrammes of powdered chemicals to all the regions. This quantity of pesticides will help manage a total of 348,620 hectares of plants countrywide, so there is no cause for alarm if farmers report and spray their farms in time,” she said.

The move follows massive attacks of the FAW on maize and other crops on farms, including that of the National Service Scheme (NSS) located at Dawhenya in the Greater Accra Region.

The devastating FAW destroyed many hectares of crops across the country especially in 2017.

This year, the worms have caused severe damage to the maize farm of the NSS.

Large investments by the management of the NSS to contain the situation have yielded few results as the evasive creatures are still wreaking havoc on the maize plants.

When the Daily Graphic visited the farm last Wednesday, in the company of the Executive Director of the NSS, Mr Mustapha Ussif, it was observed that the maize plants were seriously under attack by the FAW.

The worms were seen lodged between the nods of the maize plants, most of which were at the tussling stage.

The 50 acres of the maize farm that had been completely ravaged by the FAW had been replanted and the plants were just at the seedling stage.

Checks by the Daily Graphic at Yilo Krobo and Lower Manya Krobo in the Eastern Region also showed that the worms had destroyed large acres of crops.

Mr Ussif, who was stunned by the FAW attack on the NSS farm, appealed to MoFA to support the NSS with chemicals to fight the worms.

"The FAW attack on our Dawhenya farm is so severe and could have been worst but we bought some chemicals and applied them, with the hope that it will work. We had to replant 50 acres of the maize plants because the plants were totally destroyed.

"The cost of the chemicals is too much and so we appeal to MoFA to come in and support with chemicals, so that we can salvage the farm," he said.

Dr Ansah-Amprofi urged all farmers whose farms had been attacked by the worms to contact MoFA officials in the districts for chemicals to control the worms.

She said although the FAW had come to stay in the country for a number of years, their impact on crops could be largely minimised if farmers followed best practices in controlling them.

“As for reports about FAW attacks, we have them from across the country because so far as people have started planting maize and other crops, these worms will emerge. But we have sensitised people to always tackle the worms by spraying their farms with the right chemicals in time,” she said.

For his part, the Greater Accra Regional Director of PPRSD, Mr Sena Ahedor, told the Daily Graphic that the region had received enough pesticides and had allocated them to the MoFA offices in the metropolitan, municipal and district assemblies (MMDAs) to support farmers.

“We received 5,000 litres of Adepa, 1,000 litres of Eradicat, 1,000 litres of AMA Star and some Bypel for our region. I can say that the FAW were severe here but because of sensitisation and the prompt delivery of the pesticides, we have been able to deal with the situation,” he said.

Touching on the Dawhenya NSS maize farm, he asked the management of the scheme to contact the Ningo District Directorate of Agriculture for pesticides.