"I always say we changed the course of America over a bowl of gumbo."

In the 1950s and 60s at the height of the US civil rights movement, when activists needed somewhere discreet to discuss strategy, they would go to Dooky Chase in New Orleans - meeting in an upstairs room and make plans over generous helpings of the hearty, Creole stew, cooked up by its owner Leah Chase.

Known as the Queen of Creole, Chase - who died on Saturday aged 96 - fed Martin Luther King as he organised sit-ins with other civil rights activists.

She fed freedom riders - black and white activists who intentionally rode interstate buses into segregated states where it was against the law for them to travel together.

Thurgood Marshall, when he was the lawyer for the National Association for the Advancement of Colored People (NAACP), is even said to have made an urgent mid-gumbo call to then-attorney general Bobby Kennedy from the restaurant's phone. 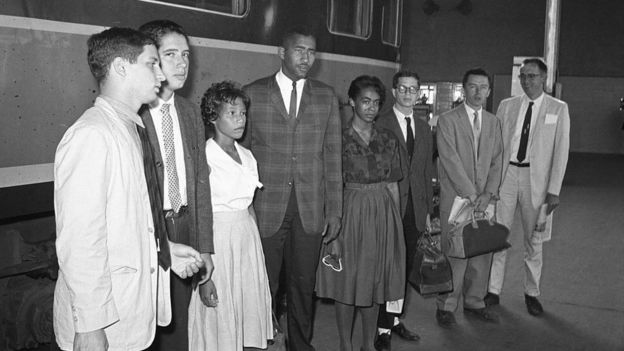 Decades later, Chase would serve the very same gumbo to Barack Obama, who was soon to become the first black president of the United States - and would slap his hand for adding hot sauce to it.

Growing up in the Great Depression

Leah was born in the small town of Madisonville, on the outskirts of New Orleans, in January 1923. Just six years later, the Great Depression would plunge many in the US into abject poverty.

Her early years were defined by poverty, and by race. In her BBC interview, she described how black and white people would live next to each other and, although "whites and blacks didn't mingle", they would get a sense of what people were like.

Growing up, she wasn't a fan of cooking - but she spent years watching her mother at work in the kitchen, picking up recipes and techniques.

When she was a teenager Chase moved to New Orleans, and saw a job advert for a "light-skinned coloured girl" to work as a waitress at one of the French Quarter's upmarket restaurants that was for white customers only.

"I wasn't light-skinned, but I thought I would give it a try," she said.

She got the job, and loved it. When she wasn't waiting tables, she would once again stand in the kitchen watching meals being prepared - but this time, they were being cooked up by professional chefs.

In 1946 she married the jazz musician, Edgar "Dooky" Chase. and started to help out with his parents' business - a sandwich shop in the majority black neighbourhood of Tremé.

She wanted the business to provide a fine-dining experience, similar to what she'd seen while working in the French Quarter, to her own community.

"I said, well why we can't have that for our people?" she told the Associated Press news agency in 2015. "Why we can't have a nice space? So I started trying to do different things."

She introduced silver cutlery and tablecloths and cooked up Creole dishes.

This was how Dooky Chase became the city's first white-tablecloth restaurant for black customers - and shortly afterwards, a safe space for civil rights activists.

'Everybody's got to eat'

In 2005, Hurricane Katrina devastated homes and businesses in New Orleans - including Dooky Chase.

The iconic dining room was flooded with 1.5 m (5 ft) of water, which sat for weeks. When the waters eventually receded, the restaurant was covered in mould.

Although Chase was in her 80s and Dooky was in his late 70s, the couple spent months living in a rescue trailer next to the restaurant while they rebuilt it. After a burst of hard work, they were back and open for business.

And within two years, she was serving gumbo to Mr Obama, just a few months before he was elected as president. 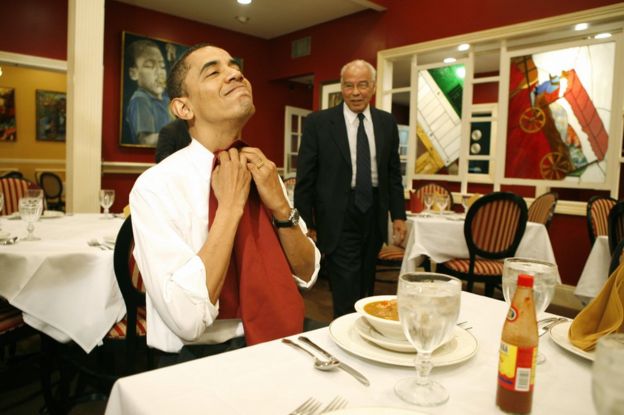 Image caption: Mr Obama getting ready to eat gumbo at Dooky Chase - without the nearby hot sauce

"He sits down to the gumbo, and the first thing he does is ask for the hot sauce," she recalled. She slapped his hand and told him that adding hot sauce was "a no-no".

"He never forgot it," she said.

In a statement, Leah Chase's family said: "Her daily joy was not simply cooking, but preparing meals to bring people together. One of her most prized contributions was advocating for the civil rights movement through feeding those on the front lines of the struggle for human dignity."

Indeed, she would often speak of the profound importance of food in bringing people together. 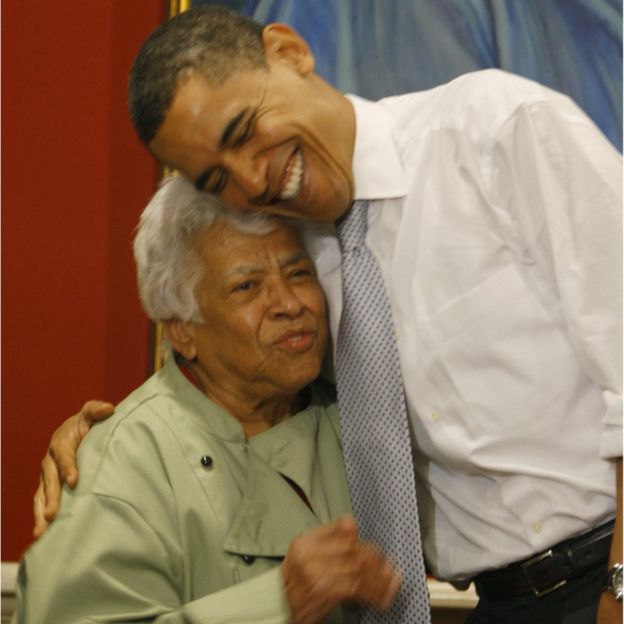 "In this business, we as blacks thought 'what am I, just a cook', 'what am I, I wait on tables, I just wait on people, that's nothing'," she told the BBC.

"But it is something. Everybody's got to eat - whether you're the president if you're the Pope, you've got to eat.

"So if you can feed them, it makes them happy - and that's your part in helping them up."