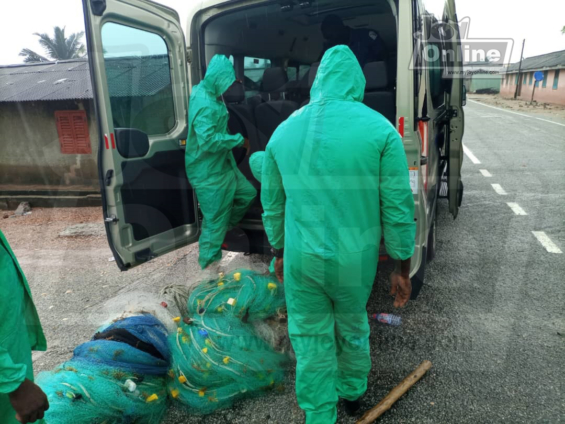 Personnel of the Fisheries Enforcement Unit (FEU) Western Command comprising of the Marine Police, Navy, and the Monitoring Control Surveillance has arrested a fisherman at Atuabo landing beach in the Western Region for disregarding the closed season directive.

The FEU team on arriving at the beach found a monofilament dragnet at the seashore wet with salty water and fresh fish entangled in it which suggested that the Fishers just came from the sea.

Inspector Wonder Kpedator, who led the team, said when the fishers saw the team proceeding to their area, they bolted.

“No one was found with the suspected Fishing net, however, those around the area when confronted deny any knowledge about the net”.

When the FEU team was loading the illegal net into their vehicle, suspect Kwaw Tanikyie of Atuabo came to claimed ownership of the said net and when challenged why they disregarded the Minister’s directives and Fishing during the period of the closed Fishing season, the suspect could not give any tangible reason and was arrested.

He was handed over to the Atuabo Police for further investigation and necessary action.

The FEU team found a similar monofilament dragnet at the shore of Beyin wet with salty water and fresh fish found in it.

The fishers were confronted after which residents mentioned one Uncle Benzile as the owner of the suspected fishing net.

The said nets were kept at the Fisheries Office in Half Assini for safekeeping and the fresh fish found in the suspected net were preserved for evidential purposes.

The above-mentioned communities suspected to have been doing similar illegalities should be checked day and night to minimize their criminal activities Corporal Agyemang with the marine police recommended.