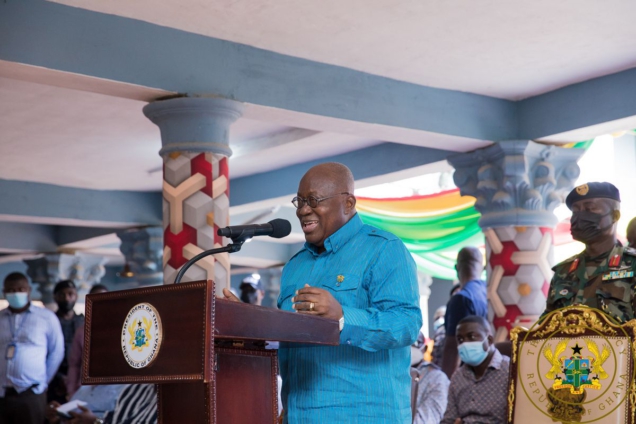 President Akufo-Addo says the one-district-one-factory (1D1F) flagship programme is not mere rhetoric, but a reality to industrialize Ghana with the establishment of more industries to create more job opportunities.

The 1D1F is a key component of the industrial transformation agenda of the Government, which was introduced as part of an integrated programme for accelerated growth and industrial development.

It aims to boost massive private sector-led nationwide industrialization drive, which will equip and empower communities to utilise local resources in manufacturing products that are in high demand for both local and international markets.

On his second day of his three-day tour of the Eastern Region on Wednesday, President Akufo-Addo was happy with the extent of progress as he opened a shoe manufacturing company under the initiative at Akropong in the Akuapem North Municipality.

The factory with state-of-the-art technology and full-fledged infrastructure has a daily capacity of producing 800 pairs of different models, including security boots, school wear and casual shoes.

This is the second 1D1F facility commissioned by the President as part of his working tour of the region which started Tuesday, the first being an 80,000 capacity garment factory in Koforidua that is expected to create job opportunities for more than 500 youth.

President Akufo-Addo stated that he would remain truthful to Ghanaians by redeeming all his promises to transform Ghana before his second and final term expires.

He later called on Okuapemhene, Oseadeyo Kwasi Akuffo and assured him of his support, saying, “As a son of Okuapeman it’s a duty for me to ensure that peace prevails in my father’s house.”

He described the Akuapem chieftaincy dispute there as a dent on the image of the people of Akuapeman and said it must be the concern of all citizens to bring a lasting solutions to the dispute.

He cited the Dagbon and Ga chieftaincy disputes which were resolved under his tenure, stating: “So shall Akuapem chieftaincy, my own backyard be resolved.”