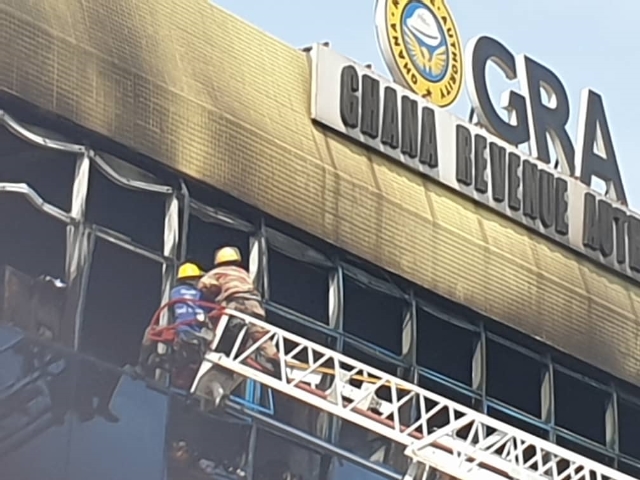 The injured persons are all personnel of the Ghana National Fire Service. An official of the Ghana Red Cross said three of the injuries are minor but one person is severely injured and has been transferred to the hospital.

The fire started at the top floor offices the GRA Head Office Annex but spread fast to other adjoining offices.

Eyewitnesses said thick black smoke began to fill the clear Sunday sky around 9:00 am before the flames became visible.

Firefighters battled the inferno but with little success. The cause of the fire is not yet known

The fire hit the Archives Department of the GRA which has a lot combustible materials, Joy News has learnt.

The street in front of the multipurpose edifice was blocked as a crowd of onlookers thickened. The Ghana Red Cross advised onlookers to stay clear of the burning building to prevent injuries from breaking glasses

Newly appointed Board Chairman of the GRA, Prof Stephen Adei, was at the scene and gave assurance that important documents are safe.

1st December & the GRA Head Office is on Fire. Most of the time, these fires are ignited by staff members who have skeletons in their cupboard. Ghana when? ðŸ˜¢ https://t.co/Vay4IyYpu5

The fire has already ripped off portions of the roofs of the offices it hit. Glass windows have also been shattered.

Six fire tenders and a turntable ladder were used by the personnel to douse the flames, Joy News”™ Maxwell Agbagba reports.

DISCLAIMER: The Views, Comments, Opinions, Contributions and Statements made by Readers and Contributors on this platform do not necessarily represent the views or policy of Multimedia Group Limited.
Tags:
GNFS
Kwame Nkrumah Circle