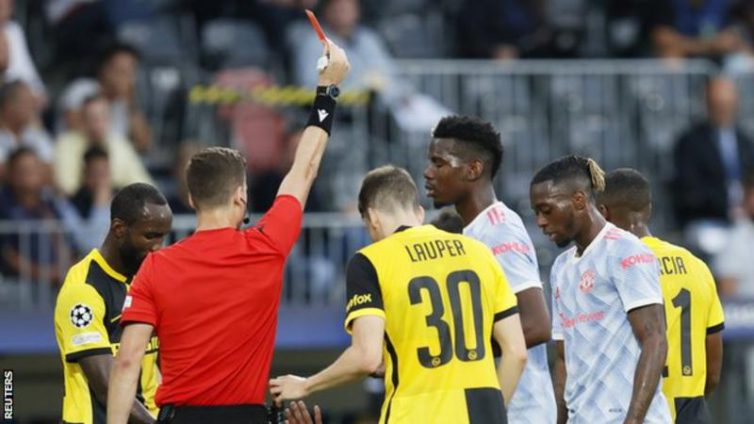 Aaron Wan-Bissaka has been given a two-match ban by Uefa for his sending off during Manchester United’s Champions League defeat to Young Boys.

The defender, 23, was shown a straight red card for a late tackle in the first half of the match on 14 September.

He will now miss Wednesday’s game against Villarreal and the home match with Atalanta on 20 October.

The Swiss side were fined £31,000 after a fan invaded the pitch and for blocking of public passageways.

Meanwhile, Leicester and Napoli have been fined for crowd disturbances during their Europa League match on 16 September.

The Foxes were fined £17,200 and the Italian side £8,600 after supporters from both clubs threw objects at each other towards the end of the 2-2 draw at the King Power Stadium.

The Italian side were also fined £4,300 and instructed to pay for any repairs after their supporters damaged parts of the stadium.

Seven men were later charged by police in relation to clashes between the two sets of fans that took place before kick-off about a mile from the Foxes’ stadium.