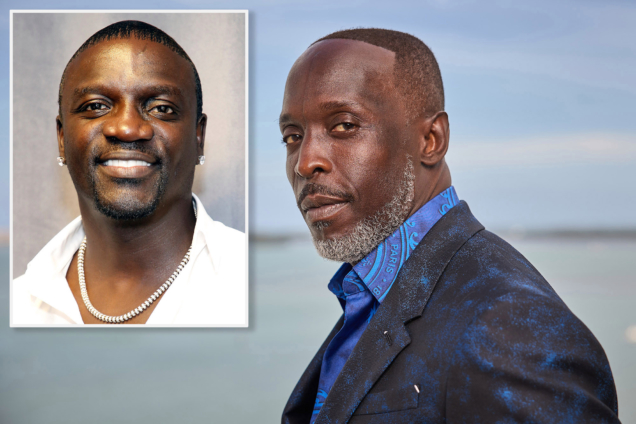 Akon has commented on Michael K. Williams' death, mourning his friend and reflecting on how celebrity can tragically cause people to to be closed off to their support networks. (Getty Images)

On the heels of actor Michael K. Williams’ sudden death, close friend Akon is mourning both the man — and the closed-off “rich people” culture of celebrity that may have hastened his tragic end.

“He was actually a really good friend, amazing person, super funny, super talented,” the 48-year-old Senegalese-American songwriter told TMZ Wednesday of the 54-year-old star of “The Wire,” who was found dead in his Brooklyn penthouse on Monday. “It’s definitely a sad day for everybody.”

The shocking death of the five-time Emmy nominee — who currently has a Best Supporting Actor in a Drama nod for “Lovecraft Country” — has prompted the “Don’t Matter” singer to think on how Hollywood’s elite fails to communicate with each other, or open up even to confidantes about personal struggles.

“There’s just too many of us going down like that and I think when moments like this happen we all gotta reflect, cause we’re all going through things in our lives … and making decisions that actually affect not only us and our life but everyone that surrounds and looks up to us,” Akon said. “The famous and the rich go through more issues than the poor. You know when they say ‘More money, more problems,’ that’s a real thing.”

Williams is suspected to have died from a heroin overdose, a fate that Akon believes far too many celebrities share because being in the spotlight makes it harder for household names to address or be open about their addictions.

“You know, this business creates this, like, environment where everyone’s wearing a mask, no one tells you what’s really going on in your life, so real friends can’t even really advise you cause we don’t really know what’s happening cause we put on this facade of success but yet behind the face there’s so much happening,” Akon went on.

The actionable takeaway is simple.

“So we gotta check up on each other, man, make sure everybody’s sound, you know, state of mind is intact, family’s good, and figure it out,” he said. “Just reach out and check on each other, man, cause we never really know what we’re going through.”

When the rapper needs help, he reaches out to his support network, and when he’s really struggling, he opts for direct solutions, not substances.

“I’m not afraid to ask for help,” he said, adding, “I face my problems head-on. Whatever challenges I have, I face it, because if you don’t face it it’s gonna haunt you, and when it haunts you long enough, before you know it, you go crazy … I would advise anyone who’s on any kind drugs of that nature: Man, just let it go, there’s other ways to cope with issues and challenges in your life besides drugs and alcohol.”

Williams’ death is additionally painful for Akon as the two hadn’t seen each other since before COVID-19 gripped the globe.

“Unfortunately because of the pandemic we haven’t seen each other,” he told TMZ. “That’s another reason why it hurts so much.”