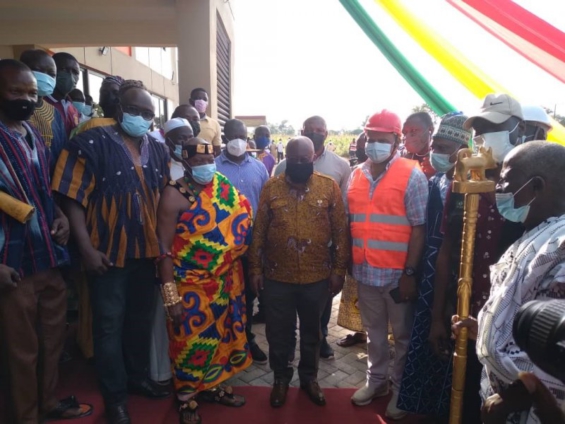 President Nana Akufo-Addo has assured of the provision of effective security to check armed robbery and other crimes, which create insecurity in the Pru West and surrounding districts of the Bono Region.

He said the security agencies are working to improve the security situation in the country. The President noted that this, coupled with the ongoing recruitment of Police personnel would improve security to protect lives and property.

President Akufo-Addo gave the assurance when he paid a courtesy call on Nana Kwadwo Nyarko III, the Paramount Chief of Prang Traditional Area in the Pru West District, as part of his two-day working visit to the Bono East Region.

Touching on agriculture, he pledged his government’s continued support to farmers through the provision of farming inputs and materials to boost the industry and encourage more Ghanaians to go into agriculture.

Nana Nyarko expressed confidence in the ability of President Akufo-Addo and his government to deliver policies and programmes for the wellbeing of Ghanaians in fulfilment of his electoral promises.

He commended the government for the provision of potable water to the people of the town and said the lack of quality drinking water had been a challenge for them over the years.

President Akufo-Addo later inaugurated a state-of-the-art building to house the Regional Directorate of Feeder Roads in the town.