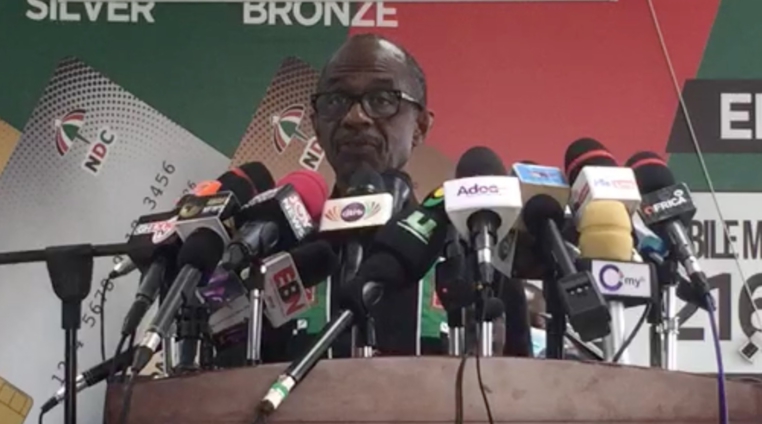 NDC General Secretary, Johnson Asiedu Nketia, says referring the Agyapa Royalties Agreement back to Parliament for review is President Akufo-Addo’s way of shifting blame and averting the embarrassment it has brought to his government.

According to him, the NPP Presidential Candidate lacks the moral high ground to manage the corruption and malfeasance that characterizes his administration.

Speaking at the 16th edition of the NDC’s weekly press briefing on Tuesday, Mr. Nketia submitted that “President Akufo Addo and his government can never recover from the embarrassment that this ‘Agyapa’ deal has brought to them”.

“Indeed, many were those in this government, including their surrogates who defended this fraud in the face of overwhelming evidence, that this vehicle called “Agyapa” was one vitiated with cronyism and illegality.

“The NPP Majority caucus in Parliament used their numbers to railroad illegality in support of the family and friends’ cabal at the helm of affairs today. Now, here we are, with President Akufo-Addo yet again trying to shift blame, by shamelessly directing the deal to go back to Parliament,” he said.

He added that Parliament will be unable to correct the faults associated with the controversial deal and asked that government accepts responsibility for its inaccuracies.

“Why should a bill which emanated from the Executive and passed unanimously by the majority caucus in Parliament, now be portrayed as though it was an error of judgement on the part of Parliament? Friends, we are sorry to disappoint President Akufo Addo, but there is absolutely no way he can exculpate himself from blame in this ‘Agyapa’ matter.

He stated emphatically that “the findings of Procurement rigging, fraud, potential money laundering and corruption, among others, border on serious offences that cannot be remedied by any Parliamentary review of the deal as is being urged on us by President Akufo Addo”.

To this effect, Asiedu Nketia charged Special Prosecutor, Martin Amidu to effectively investigate and bring to book persons involved in the appraisal of the Agyapa Royalties Agreement.

“These issues can only, and must be addressed through the criminal justice system of this country. The Special Prosecutor ought to be reminded that he is mandated by law to investigate and prosecute among other offenses, breaches of the Public Procurement Law and the other offenses he has uncovered through his investigations into this Agyapa scam.

He asked that the OSP conduct criminal investigations into this matter and ensure that anyone who directly or indirectly played any role in this Agyapa scam, faces the full rigours of the law.