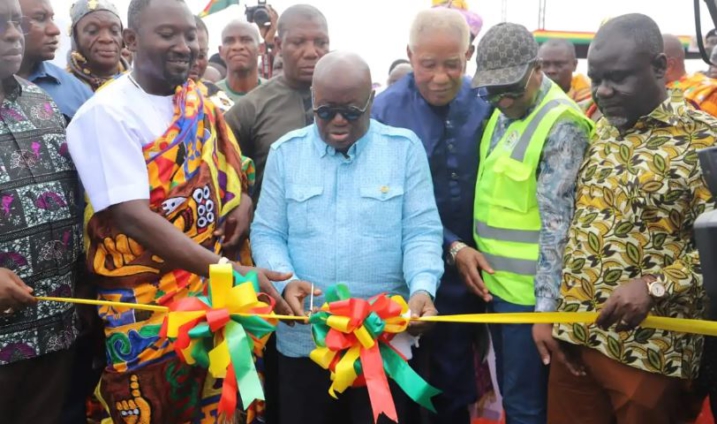 The over-bridge has been constructed as part of the 97.9km  standard-gauge rail line project from Tema to Mpakadan in the Asuogyaman District in the Eastern Region.

The project was conceived  in the early 2000’s by the erstwhile Kufour Administration as part of an intermodal  transport system involving road, rail and lake transport  to facilitate the haulage of cargo and the movement of people from the southern part of the country to the Northern sector.

President Akufo-Addo said the project represented another mile stone in the country’s drive to expand and develop its infrastructure.

Currently the transportation of domestic and transit freight between Accra , Tema to Northern Ghana and further to Burkina Faso , Mali and Niger is road based via Kumasi, Tamale, Bolgatanga, Navrongo and Paga.

The President said the over dependency on the country’s road network is worrying.

He said the lack of other transport alternatives, particulatly between Acccra and Kumasi, had resulted in congestion and the rapid deterioration of roads and increases in road accidents.

He said the project was part of efforts to create a multi-modal transport link between Tema and Buipe through the volta lake.

The Project, which is at 96 percent complete, was funded with a credit facility extended to Ghana by the Exim Bank of Indian.

It is expected to be completed by the end of March next year.

President Akufo-Addo told the gathering that the implementation of the project was testimony of the strong historic ties between Ghana and India.

He said the project would address the imbalance between transport modes for long distance transit and domestic freight movement from Accra, Tema and Northwards and vice-versa using the Volta lake transport system.

The project would also improve the operations  and competitiveness of the Tema Port, reduce freight transport cost and enhance safety.

Additionally, it would lower the cost of freight and that of doing business in Ghana.

“Not only will this project improve transit cargo volumes through the Volta lake, but it will also expand domestic shipments to and from the lake and will serve as a boost for agriculture and enterprises within the environment of the lake.”

He said the project, when successfully operationalized, would link the Tema Port to the lake transport network, especially the North-South movement, over a distance of some 400km.

It would open up the Volta lake for the transportation of not only fuel and cement but also containerised cargo and agricultural produce from the Northern enclave in the Afram plains to the port of Tema and other destinations.

The project is expected to reduce the pressure on the road network, especially the Eastern corridor which is under vigorous construction.

It would also minimise the cost of transportation of bulk commodities, provide affordable and reliable alternative means of transport for passengers who are not served by the road transport system along the corridor.

President Akufo-Addo was happy with the progress of work on the project, and urged the contractors, Messrs AFCONS Infrastructure Limited of India, to complete the outstanding works on schedule.

He took a tour of the New Afienya railway station, and later inspected another 300 meters of rail bridge over the Volta lake at Senchi.

DISCLAIMER: The Views, Comments, Opinions, Contributions and Statements made by Readers and Contributors on this platform do not necessarily represent the views or policy of Multimedia Group Limited.
Tags:
Akufo-Addo