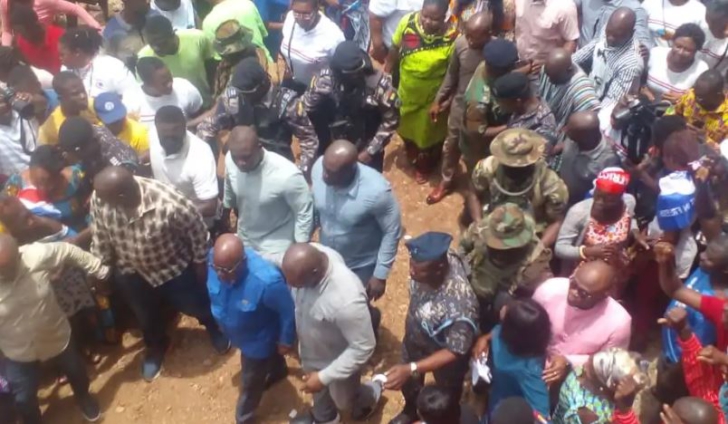 President Akufo-Addo on Tuesday inspected works on a second phase construction of the Ho Central Market.

The project comes under the World Bank Secondary City project, a 100-million-dollar infrastructure support for 25 selected municipalities in the country.

It includes close to 200 stores, a lorry terminal, and a mosque.

President Akufo-Addo was in the company of Ministers for Local Government, and Roads and Highways, and was briefed on the project by Mr Divine Bosson, the Municipal Chief Executive for Ho.

The project, which also provides several toilet facilities, was made possible through the reclamation of land, and the MCE said the market would be transformed upon completion.

He led the President around the four-block project ongoing in two phases, and which is about 90 per cent complete.

The President had arrived in Ho on Monday and opened the 2022 Annual General Meeting of the Ghana Bar Association, before heading down the Eastern Corridor superhighway to inspect progress of its construction.

Prior to visiting the market, the President had met with leaders of the 66 Artillery Regiment in Ho, in a series of closed-door meetings.

The President had inspected a guard of honor at the Volta Barracks and had received a 21-gun salute at the Ho Technical University when he arrived for the Bar Conference.

President Akufo-Addo is using the two-day tour to inspect ongoing projects and is expected to commission a community day senior high school at Aflao, and a District Court in Battor before heading back to Accra.

DISCLAIMER: The Views, Comments, Opinions, Contributions and Statements made by Readers and Contributors on this platform do not necessarily represent the views or policy of Multimedia Group Limited.
Tags:
Akufo-Addo
Akufo-Addo government
Volta Region