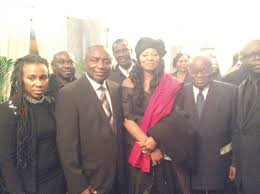 The 2012 presidential candidate of the New Patriotic Party (NPP), Nana Akufo -Addo, joined the family of former presidential spokesperson, Kwabena Agyei Agyapong, to mourn the death of his mother, Margaret Agyapong, at a memorial service in London.

The late Margaret Agyapong died on Friday September 27th, 2013 in London, after a short illness. She was the wife of late Justice Kwadwo Agyei Agyapong.

The memorial service to bid final farewell to the late Margaret Agyapong was held on Thursday, November 21, 2013.

Nana Akufo-Addo, who is on a sabbatical break after the 2012 presidential election petition hearing, was accompanied by some leading members of the NPP and a cross section of the Ghanaian community in the United Kingdom.

Notable among them were Mr. Atta Krufi, Chairman of the UK branch of the NPP, Richard Diedong Dombo, Stanley Nii  Agyiri Blankson, former Mayor of Accra and members of the Young Executive Forum (YEF), UK chapter.

The final funeral rite of Margret Agyapong will be held on December 7, 2013, at Asokore Mampong in the Ashanti region.