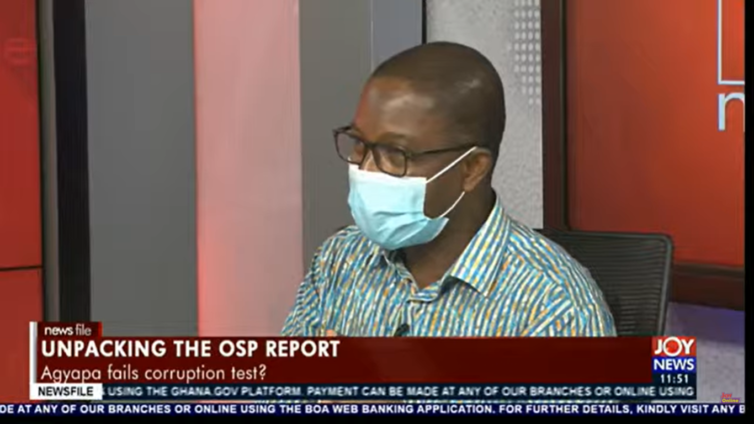 According to him, the Corruption Risk Assessment conducted by the Office of the Special Prosecutor clearly indicates that a second look is not the best way to go.

“The President’s direction is bizarre because if we add up the elements and what the special prosecutor report is saying, there is nothing to take back to parliament.

“This is something which is indicted in terms of how the services were procured and therefore it is not justifiable because of conflict of interest,” he added.

A Corruption Risk Assessment conducted by Martin Amidu stated that there was reasonable suspicion of bid-rigging and a high risk of corruption activity in the selection process of the deal.

The findings also uncovered cases of alleged manipulation of the procurement process by the Ministry of Finance by adding an unapproved rider for collaboration with a Ghanaian firm.

Even though critics have called for the withdrawal of the deal, Mr Akufo-Addo has instructed the Finance Minister to return the Agyapa Royalties Agreement to Parliament for a review after the Office of the Special Prosecutor forwarded its report to him.

Speaking on Newsfile Saturday, Dr Yao Graham indicated that, the incumbent government “should go to the very heart of the conception, whether this is the best way to improve the value of the countries gold resources.”

“The government should honestly accept that it is not the way to go….the conclusions of the effects of the process by Martin Amidu really leads to the point that we should just put it [Agyapa deal] down as a bad experience,” he said on JoyNews.