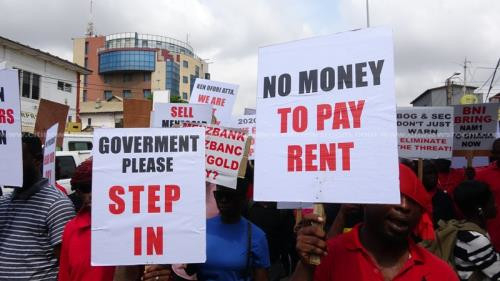 Aggrieved customers of Menzgold are unhappy with government’s silence on their plight during the President’s recent presentation of State of the Nation Address (SONA) to Parliament.

They say though they did not expect President Akufo-Addo to announce the payment of their investments in the collapsed gold dealership firm, an update on the matter would have been helpful.

“We were expecting him to say something with regards to the current state of the Menzgold issue in Ghana. How the customers are suffering to the extent that we have made the entire nation including the President aware that over 30 members are dead now and a number of our people are suffering,” Leader for the aggrieved customers Ezekiel Annor Akagbor told JoyNews.

The sentiment follows an announcement by President Akufo-Addo that payment of locked-up funds of customers of defunct savings and loans companies as well as microfinance firms will begin on Monday, February 24.

Subsequently, the Consolidated Bank Ghana in a communiqué to its staff has outlined payment modalities for customers, confirming the arrangement by government to pay all depositors of failed financial institutions, including DKM.

But expressing their disappointment at a meeting held in Kumasi, the aggrieved customers described the continuous silence by government on the issue as worrying and unfair.

“It was when government interfered that we stopped getting our money, so we were expecting Nana Akufo-Addo during his address to talk about the Menzgold money that is locked up but it seems he is not interested.

“There has been a lot of pleads, we have written to so many places but nothing has been done.

“We have even petitioned government, yet we have not seen anything. Nana Appiah Mensah claims BoG has frozen his account, and he can pay us if he is able to retrieve it, so why is government not coming to our aid to help us?