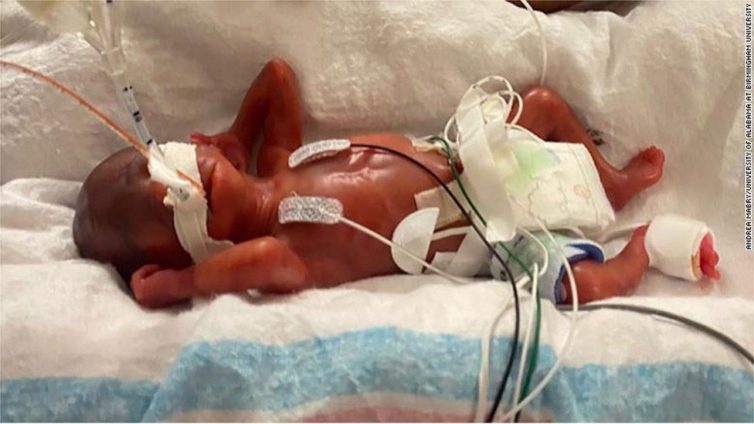 A US boy born at 21 weeks and a day weighing under a pound has been certified as the world’s most premature baby to survive.

His mother, Michelle Butler, went into labour and rushed to hospital on 4 July 2020 as Independence Day fireworks filled the night sky.

She gave birth to twins, Curtis and C’Asya, at lunchtime the next day.

C’Asya died a day later. The hospital said it typically offers parents compassionate care in such situations, allowing them to hold their tiny infants for what little time they may have left together.

But with a less than one per cent chance of survival, Curtis clung on in intensive care.

He was taken off a ventilator after three months and discharged this April following 275 days in hospital.

Therapists had to help him learn how to breathe and use his mouth to eat.

Mrs Butler, of rural Eutaw, Alabama, said in a statement: “Being able to finally take Curtis home and surprise my older children with their younger brother is a moment I will always remember.”

Curtis – who has three older siblings – still needs supplemental oxygen and a feeding tube, but doctors say he is in good health.

Dr Brian Sims, the University of Alabama at Birmingham neonatologist who oversaw the delivery, told Guinness World Records: “I’ve been doing this almost 20 years, but I’ve never seen a baby this young be as strong as he was. There was something special about Curtis.”

Curtis shaved 24 hours off the previous record, which was held by Wisconsin baby Richard Hutchinson, who was born just a month beforehand at 21 weeks and two days.

Before Richard, the record had remained unbroken for 34 years, having previously been held by a baby boy born in Ottawa, Canada, at 21 weeks and five days.

DISCLAIMER: The Views, Comments, Opinions, Contributions and Statements made by Readers and Contributors on this platform do not necessarily represent the views or policy of Multimedia Group Limited.
Tags:
Alabama
Curtis Means
Guinness World Record
Premature Baby