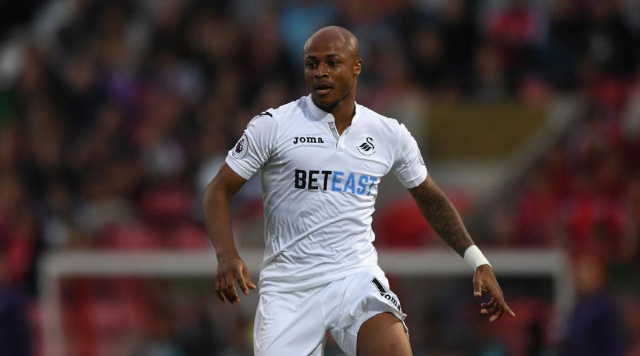 Ayew, 29, was given an extended a break following the Africa Cup of Nations, but returned to Wales this week.

The Ghana forward spent last term on loan at Fenerbahce and was expected to leave once more this summer, but he remains a Swan for now.

“I look forward to working with Andre and hopefully he can play a part,” Cooper said.

The Swansea boss accepts there is “a bit of recent history” between Ayew and Spanish striker Borja – two high profile players whose Liberty Stadium game-time has been limited.

“I can have an understanding of that, but (will) focus on going forward,” said Cooper.

“For me the first part of the process with Andre was to have a conversation this week which went very well and I’m looking forward to him joining the training group on Sunday. Like everyone else, we work from there.”

He returned to Swansea in a club-record deal in January 2018, but could not save them from Premier League relegation and joined Fenerbahce on loan in July, 2018.

Ayew is Swansea’s highest earner and could still leave if the club receive an offer from abroad in the next few weeks, but for the moment he is set to remain at the Liberty Stadium.

“He’s had to do his testing and get himself up to speed,” Cooper added.

“We need to make sure the performance staff are aware of where he’s at physically and mentally as well.”

Cooper is not expecting transfer business ahead of the transfer deadline, but Swansea have signed forwards Sam Surridge and Aldo Kalulu this week.

“Sam’s had some good loans in previous seasons, albeit at a lower level, but that’s the progress of a young player. He’s definitely ready for a season in the Championship,” Cooper said.

“Aldo’s very fast and dynamic. He can play in a number of positions at the top end of the pitch – I think he’ll do a bit of everything this season.”

A number of transfer markets around the world will remain open after the deadline for the Premier League and Chamionship, while sides in the English lower divisions can make signings until 2 September.

When asked if players could yet leave Swansea, Cooper added: “Anything is possible, but they’ll be on our terms, that’s for sure. They’ll be players we’re happy to let go.”