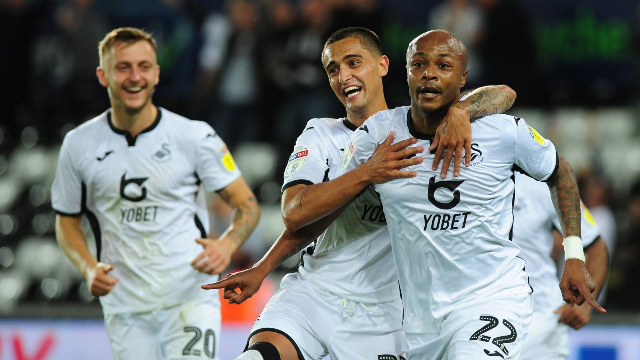 Ghana captain Andre Ayew made a scoring return for Swansea as his brace sealed a 3-1 victory over Northampton Town in the Carabao Cup on Tuesday.

Ayew came on as a substitute and scored two goals as Swansea came from behind to seal qualification into the second round of the competition.

The 29-year-old was making his first appearance for the club in 15 months after spending last season on loan at Turkish side Fenerbahce.

As one of the club’s highest earners, the former West Ham United and Marseille player had been expected to leave this summer.

But, with no clubs showing interest at the moment, Ayew has been welcomed back into the Swansea fold and he could yet prove to be a valuable asset in the Championship.

Ayew was re-signed by the Jack Army on a three-and-a-half-year deal in January last year following an unsuccessful stint with West Ham United.