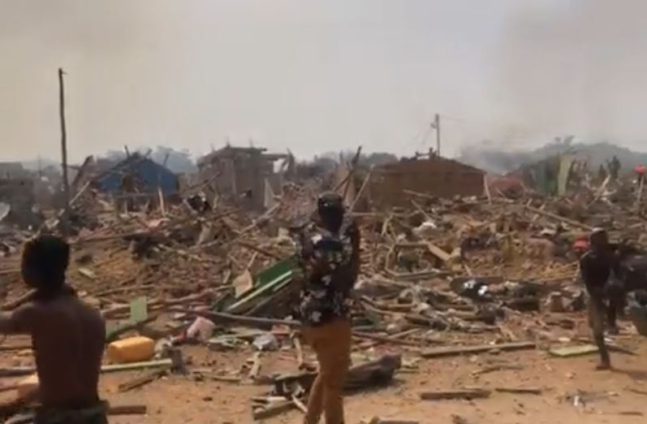 The National Democratic Congress (NDC) has suspended its ongoing outreach programme in the Western Region to commiserate with the victims of the Apeatse explosion.

In a statement issued by the party’s National Chairman, Mr. Samuel Ofosu-Ampofo, on Friday, the party indicated that it has been saddened by the mayhem which has affected hundreds of households in Apeatse.

The party has therefore pulled the breaks on its ongoing outreach programme, and called on government to restore normalcy in the community as soon as possible.

“The NDC joins other well-meaning Ghanaians first in expressing our deepest condolences to the families of all persons who lost their lives through this tragic event. The party further takes this opportunity to request the healing mercies of the Almighty God for a speedy recovery of all injured persons. No one could have foreseen a calamity of such magnitude befalling the good people of Apeatse at a time such as this.

With a reported estimate of 95% of all households in Apeatse reduced to rubble due to the impact of this disaster, it stands to reason that Government must double-up its efforts in finding temporary shelter for all displaced persons while urgent steps are taken to reconstruct the town and bring normalcy back to the lives of the good people of Apeatse.

The leadership of the NDC has suspended its ongoing outreach program in the Western Region and has directed the regional leadership of the party to visit and commiserate with the victims of this disaster as soon as possible”, portions of the statement read.

The statement by the NDC, adds to the scores of solidarity messages and well wishes, that have poured in following an explosion that has severely affected indigenes of Apeatse in the Western Region.

Earlier, the party’s flagbearer in the 2020 general election, John Dramani Mahama, also expressed his condolences to the victims and urged government to take necessary steps to lessen the impact of the disaster.

Speaking in an interview on News Night on Thursday, the District Director of the National Disaster Management Organisation, Sedzi Sadzi Amedonu, revealed that about 500 houses have been affected by fire and debris following the incident.

According to him, the impact of the explosion has been very severe, leaving many local folks totally displaced.

Meanwhile, Vice President, Dr Mahamudu Bawumia, has assured that measures are being put in place to construct temporary housing facilities for all displaced residents of Bogoso-Apeatse. He says the government has engaged the State Housing Corporation and mining companies in the area to provide an instant haven for the stranded community members in the coming days.

According to the police, 13 persons have so far lost their lives, with about 190 others injured. 384 indigenes have been displaced, with some four other persons in critical conditions.