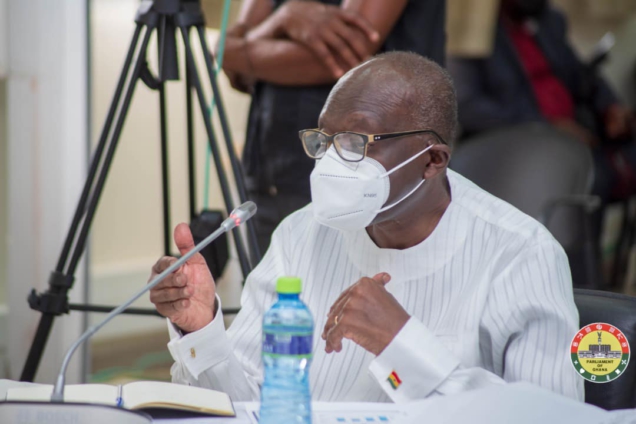 The Appointments Committee chaired by Joseph Osei Owusu has requested that all 275 members of Parliament approve Ken Ofori-Atta as the Minister for Finance.

“The Committee, after deliberation on the nomination of H.E., the President for the Ministerial Appointments and in accordance with Article 256 (1) of the 1992 constitution and Order 172 of the Standing Orders of Parliament, recommends for the approval of the House, the nomination of Mr Ken Ofori-Atta for appointments as Minister responsible for Finance,” the letter stated.

Minister-designate Ken Ofori-Atta who is seeking to be retained as Finance Minister faced the 26-member Appointments Committee on Thursday and Friday for vetting.

Speaking to JoyNews Parliamentary Correspondent Kwesi Parker-Wilson, Joseph Osei Owusu who doubles as the First Deputy Speaker disclosed that a consensus has been reached and the Committee is requesting Parliament in accordance with article 256 (1) of the constitution and Standing Order 172 to retain the Minister-designate to assist the second administration of the President.

According to Chair, Joe Wise, both sides of the Committee that is the NDC and the NPP concurred that the actions of Ken Ofori-Atta during President Akufo-Addo’s first administration earn him an additional 4 years to complete the initiatives he started.

“Individual members are expected to behave as individuals, no individual voted against the recommendation of the Committee,” he said.

The Bekwai MP told JoyNews he expects the House to approve the nominee by a voice vote based on their recommendation, unless the outcome on the voice vote is challenged.

“If you challenge the voice vote, what it means is that the Speaker may ask that we take a decision by division. But otherwise, any member may decide to vote no or in favour say ‘I’ and against say ‘no’ and somebody may say no. The Speaker’s declaration that ‘I’s have it or the ‘no’s have it may be challenged.

“These are all procedures in our standing orders,” he stated.

Before the approval of some ministerial nominees including Mavis Hawa Koomson, Kojo Oppong Nkrumah and Dr Owusu Akoto Afriyie, some members of the NDC Caucus opposed their approval when their recommendations came before the Floor of the House, forcing the plenary to vote by secret ballot.

However, the Appointments Committee Chair also pointed out that a secret ballot will not be needed in this case as the Committee reached a consensus on its recommendation.

“Often, if there will be a secret ballot, it starts from the Committee. When there is no agreement at the Committee, and the recommendation is by a majority, then the House takes a decision by a secret ballot. But when the members recommend by consensus that the person be approved by the House and often by a voice vote,” he explained.

Meanwhile, Joseph Osei Owusu is insistent that Mr Ofori-Atta was not recommended by the Committee because of his health condition but rather his merit and capabilities.

“The Committee came to a conclusion after considering the nominee. The work of Committee is to consider the nomination of the person. After consideration, the Committee agreed that he be recommended to the House to be approved,” he said.

He added that the Committee is competent enough to come by a conclusion that has the interest of the nation at heart.

DISCLAIMER: The Views, Comments, Opinions, Contributions and Statements made by Readers and Contributors on this platform do not necessarily represent the views or policy of Multimedia Group Limited.
Tags:
Appointments Committee
Joseph Osei Owusu
Ken Ofori-Atta
Parliament