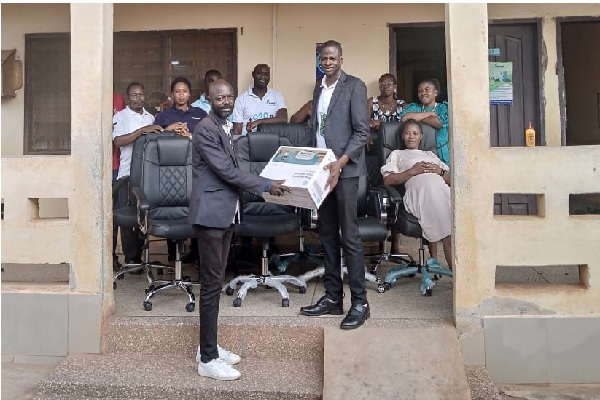 The Attorney General and Minister for Justice, Gofred Yeboah Dame, has donated eight office chairs and a brand new printer to the Wenchi Municipal office of the National Health Insurance Authority (NHIA) in the Bono Region.

“The Attorney General decided to assist the Wenchi Municipal NHIA office with these items based on a request by the management and staff of the office.

It is to fulfill the promise made by the Attorney General,” he stressed.

The public relations officer for the Wenchi Municipal office of the NHIA, Kwadwo Owusu Agyemang, who received the items on behalf of the management, commended the Attorney General for such a benevolent gesture.

“These pieces of office equipment will surely enhance efficiency in our office as well as maintain the high standards we at Wenchi NHIA office have set,” he added.

The PRO said most of their data entry clerks developed disturbing health conditions because they have been sitting on plastic chairs for long hours.

According to him, “most of the office chairs have worn out because we have not replaced them since we started operations in 2004”.

Owusu Agyemang further explained that the Attorney General’s presentation is a swift response to an appeal sent out by management requesting office chairs and other equipment.

He, however, said there are still numerous challenges confronting the smooth operation of the office, and called on Wenchi residents both home and abroad to help with laptops.

He said, “this will enable us to speedily execute our mandate during outreach activities whilst the other workers in the office continue with smooth operation”.

DISCLAIMER: The Views, Comments, Opinions, Contributions and Statements made by Readers and Contributors on this platform do not necessarily represent the views or policy of Multimedia Group Limited.
Tags:
Attorney General Godfred Dame
National Health Insurance Authority (NHIA)
Wenchi