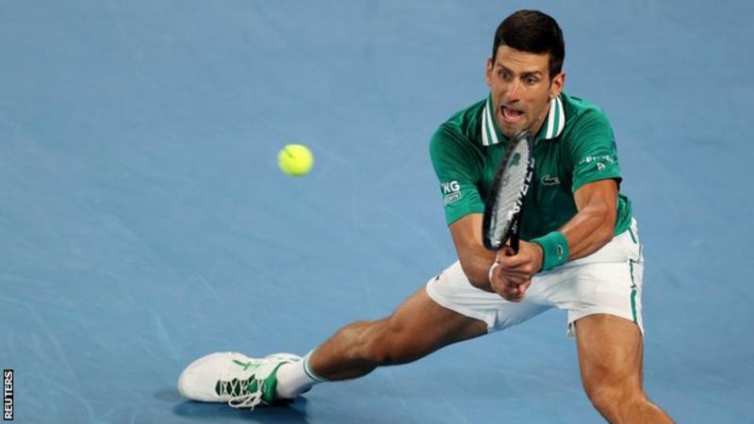 The Serb will face Russian qualifier Aslan Karatsev, who beat an injured Grigor Dimitrov, on Thursday.

Karatsev, ranked 114th in the world, is the first man in the Open era to reach the last four on his Grand Slam debut.

Few will fancy Karatsev – who has largely plied his trade on the second-tier ATP Challenger Tour – to continue his dream run by beating eight-time champion Djokovic.

The 33-year-old world number one looked far from comfortable against Zverev, a result of the German’s big serving and probing groundstrokes as much as the abdominal injury which has bothered him throughout the tournament.

“Down to the very last shot, it was anybody’s match,” said Djokovic, who could only manage a wry smile after taking his second match point with an ace.

“Emotionally I feel a little bit drained, it was a real battle. We pushed each other to the limit.”

Djokovic shows class by dialling in at the key moments

Whether Djokovic would progress to the last four hung in the balance for most of an enthralling match against 23-year-old Zverev.

Momentum swung between the pair as they split a scrappy opening two sets, with the fluctuations continuing as the level increased in the third and fourth.

Afterwards, Djokovic said he was still troubled by the abdominal injury and that perhaps contributed to the tetchiness he showed after allowing the momentum to shift back to Zverev in the third set.

Shortly after sitting at the back of the court while Zverev changed racquets, illustrating his exasperation at the delay, Djokovic erupted as he went 4-1 behind.

Three times he ploughed his racquet into the blue court, leaving shards of his frame needing to be swept up by a ball girl before play could resume.

Releasing his frustration paid dividends. Djokovic won the next four games to turn the set in his favour, helped by Zverev’s old habit of producing double faults at crucial times.

Another ferocious roar from Djokovic signified the importance of edging ahead.

That left Zverev with an uphill task if he was going to earn his first victory over a top-10 opponent at a Grand Slam.

An early break in the fourth set boosted the German’s chances, supplemented by a tough hold – where the return of his double-fault demons threatened to let Djokovic back in – for a 3-0 lead.

Not for long, however, as Djokovic broke back in Zverev’s next service game. That enabled the Serb to level at 3-3 and the pair could not be separated until the tie-break.

After missing the first match point with a backhand into the net following a long rally, Djokovic made no mistake with the second.

Djokovic’s subdued celebration was a stark contrast to the manic reaction of his team, who jumped and hugged to celebrate their man reaching a 39th Grand Slam semi-final.

Asked if the abdominal injury was the toughest he had to deal with at a major, he said: “Yes. I have been doing various things to try to put myself in a condition to play.

“I haven’t been practising on the days off and I will do the same. I hope the result will be the same as today.”

Despite his troubles, a defeat by Karatsev on Rod Laver Arena – a court which Djokovic says “feels like home” after his domination of the tournament over the past 13 years – would be a seismic shock ranked among the game’s great upsets.

Karatsev trying to think ’round by round’

Reaching the last four is a remarkable achievement for Karatsev, who grew up playing tennis in Israel after moving there as a three-year-old.

After moving back to Russia with his father aged 12, he trained in Rostov and Moscow as a teenager before continuing a nomadic career which has seen him work with coaches in Spain, Germany and Belarus.

He has become the second qualifier to reach the Australian Open semi-finals after Australian Bob Giltinan in December 1977.

Karatsev is also the lowest-ranked man to reach the last four since Patrick McEnroe, then ranked 114th, did so in 1991.

“It’s amazing that I reached the semi-final from qualifying. I’m just trying to enjoy the moment and not thinking about that too much and playing from round to round,” said the 27-year-old.

Karatsev’s progression was helped by the injury problems for an upset Dimitrov, who needed treatment on his back and was struggling to move by the end of the match.

Karatsev himself looked fatigued in a poor first set, with Dimitrov reeling off five games in a row to take the opener.

Karatsev had to stave off five break points in a 13-minute service game in the early stages of the second set before taking advantage when Dimitrov’s level dipped.

Dimitrov, a semi-finalist at Melbourne Park in 2017, repeatedly mouthed “I’m sorry” at his coaching box and struggled to walk up the stairs after the match.

“I got a back spasm yesterday at some point and that was it. We couldn’t fix it on time,” said Dimitrov.

“It happened early in the match. It kept on progressing, and it was unstoppable.”