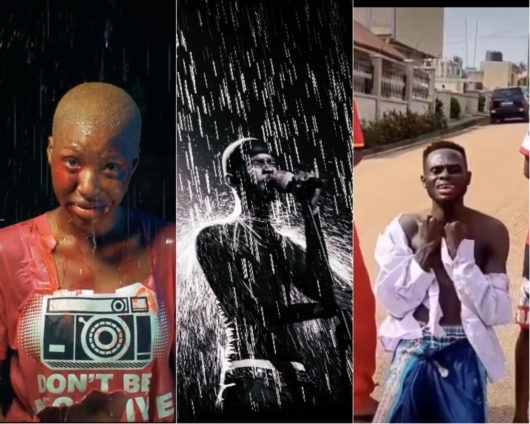 Millennials have taken the euphoria surrounding the ‘Kwaku The Traveller’ to another level.

Already the song has topped charts in Ghana, Nigeria Gambia and is currently Number 73 on Apple Music’s Global Top 100.

It has become the second most-streamed hip-hop song on Audiomack after YoungBoy NBA and on YouTube, the audio slide is just nearing 900,000 views.

While many continue to wonder what did it for the 20-year-old Black Sherif, the song’s enchanting vibe seems to have caught on with TikTok users.

It has over the past few days become the stock of influencers and ordinary users alike.

Many of them are improvising to recreate the rain-esque performance of Blacko while others employ the now-famous “who never f*cked up hands in the air,” to convey a variety of massages.

And interestingly, it is gaining traction. The litres of water being used in getting some of the drama across are literally flooding timelines.

Nearly 45,000 videos have been uploaded onto the video blogging platform using the song as of Tuesday, April 5, 2022.

On the song itself, the Konongo-based musician expands on the shouldering of one’s mistakes in the search for greener pastures, the criticisms and the perseverance to push through nonetheless.

It is the third project to follow his breakout First and Second Sermons after the latter record drew in Burna Boy for its remix.