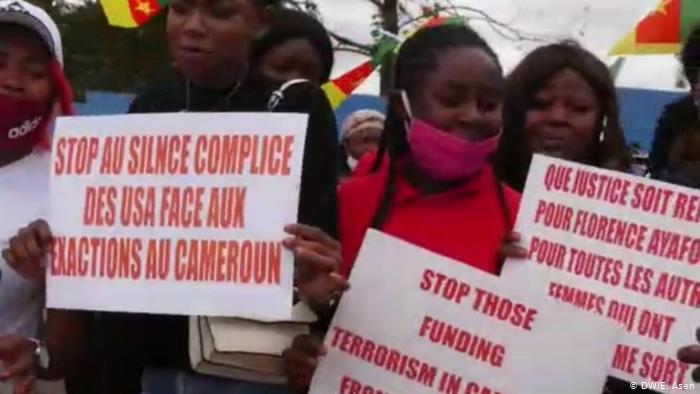 The massacre of schoolchildren in Cameroon has grabbed global attention. Experts have called for the international community to stop ignoring the Anglophone conflict.

Cameroon’s government has blamed Anglophone separatist militants for the killing of eight children in Kumba in the country’s Southwest Region.

Thirteen other children were wounded, some of them seriously, as gunmen burst into the school compound and opened fire around midday on Saturday.

Some social media users, however, were quick to point out that another massacre in February in Ngarbuh, in northwest Cameroon, was carried out by government forces.

At least 21 civilians, including 13 children, were killed when soldiers attacked the village.

In the past, rights groups have accused both separatists and government troops of killing civilians during the conflict in the Northwest and Southwest provinces, where English-speaking separatists have been fighting for independence since 2017.

Kah Walla, president of the opposition Cameroon People’s Party, who is from Kumba, has condemned the massacre and all violence related to the ongoing Anglophone crisis.

“When you take up arms you lose an advantage. You lose the high moral ground from which you can say: ‘Look, we are protesting peacefully and the government is being violent’,” Walla told DW in an interview. “Violence begets violence.”

Separatist leader Ayuk Tabe, currently under arrest, tweeted his condemnation of the killing of the Kumba schoolchildren, who were aged between 7 and 12.

International community looks the other way

Cameroon’s armed conflict has claimed the lives of more than 3,000 people and forced 700,000 to flee their homes.

Despite the scope of the crisis, the international community seems unwilling to respond adequately to President Paul Biya’s handling of the situation, said Kah Walla.

“When you take up arms against a state you embarrass all other states. They have difficulties supporting you because they may be creating a precedent from which they themselves will suffer one day,” she said.

Cameroon’s biggest and most influential neighbor, Nigeria, for instance, relies on the cooperation of Yaounde to help fight the Islamist insurgents of Boko Haram.

Nigeria also has its own separatist agitations, such as the Biafran movement in the Eastern part of the country, points out Walla. She believes that makes them “unwilling to take any action,” adding that the African Union had yet to put Cameroon’s Anglophone crisis on its agenda.

The European Union and the United States have also failed to take a more forceful stance, besides releasing statements condemning the violence.

Walla believes the violence perpetrated by the separatists has helped Biya fend off international pressure to find a solution to the crisis.

“The government says: ‘We are dealing with separatists who are kidnapping, who are cutting off people’s heads, who are committing violence on children’,” she said.

Christoph Hoffmann, a German member of parliament with the pro-business FDP party, has been pushing for years without success to get Berlin more involved in peace efforts in Cameroon.

“We tried to get the German Chancellor Angela Merkel [to travel to Cameroon] but she officially declined. Now we are trying to get Foreign Minister Heiko Maas to go there and negotiate and contribute to a peaceful solution,” Hoffmann told DW.

Maas could also help free Wilfried Siewe, a German with Cameroonian roots jailed in the capital, Yaounde, for participating in and taking pictures at a demonstration, Hoffmann said.

“There have been a lot of excuses because of COVID-19 and the risk of going to Africa, which is ridiculous. I went to Mali three weeks ago and there is no risk at all,” he said, adding that he took the necessary precautions.

Traditionally, he said, Germany is loath to interfere in countries where France has vested interests, such as in Cameroon, a former French colony.

But Hoffmann believes Germany’s lack of colonial connection is an advantage his country should use to “play a more important role within the European Union and even looking toward the African Union,” he said.

As for Cameroonians, they are increasingly agitating for peace. Emboldened by the success of a recent social media campaign that kept the government from implementing a tax on imported phones, they have created the hashtag #EndAnglophoneCrisis, directed at both sides of the conflict.

Politician Kah Walla applauds the initiative, saying the effectiveness of such movements shouldn’t be underestimated. In the end though, she still believes the regime of President Paul Biya needs to go.

“We will not get a sustainable solution from this corrupt government,” she told DW.