The Chinese community in Ghana is the latest among the Asian giants’ nationals worldwide to call for calm back home.

The group is pointing fingers at the West for stoking fires which led to police and demonstrators clashing thereby leading to the situation degenerating.

Demonstrations were sparked by an extradition bill but have since morphed into broader anti-government protests, and developments on Sunday marked a serious escalation in the unrest.

Police told local media that the gunshot was fired as a warning to protesters and that several officers had been taken to hospital as a result of the clashes.

A Hong Kong police officer fired a gunshot during protests on Sunday, the first time a live round has been used since demonstrations broke out in June.

Images show several other officers also pointed guns at protesters who were charging at them with sticks and poles. In another first, police deployed water cannon against protesters earlier in the day. 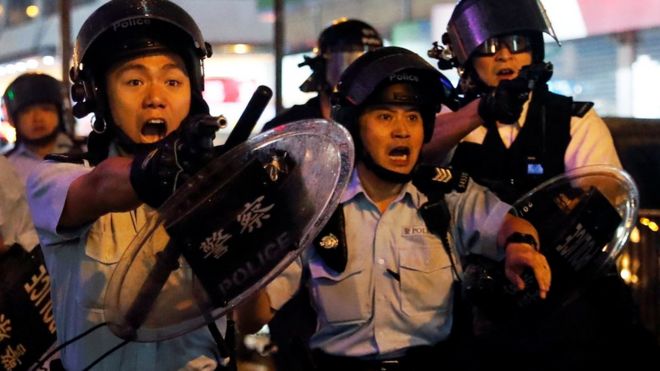 The protests began in the city’s Tsuen Wan district and then spread to the district of Tsim Sha Tsui.

Hong Kong police said 36 people had been arrested as a result of Sunday’s protests, the youngest aged just 12, the BBC and other international media houses have reported.

But the Chinese nationals in Ghana have disagreed with the reportage.

They are blaming the inaccurate reportage by western media aimed at making the government of Hong Kong and the central government of China unpopular.

They say in time the world will see through the game being played by the West via the media and that will not topple China.

Addressing the media at Kpone Monday, the Chinese Ambassador to Ghana, Shi Ting Wang said it is a ploy by the US and UK government’s to destabilise China using the Hong Kong issue.

“This was a simple judicial matter which shouldn’t have gotten here,” he told Joy News Kwame Yankah.

“Worse protests do happen in the west but their media outlets cover with circumspection. We see this as a clear means of challenging two systems running in one country,” Ambassador Wang said.

The Chinese community in Ghana at its general assembly displayed banners and placards to show support to Hong Kong.

He chided the western media for turning blind eye to the destruction being caused to state properties among other things.

Shi Ting Wang was emphatic that the Chinese government will not allow a few violent citizens to undermine the rule of law in the country.

“The central government of China will never allow anyone to undermine the two system governance we have neither will we allow anybody to under rule of law,” he pointed said.

He assured Chinese nationals that the Chinese government will do everything possible to end the unrest.