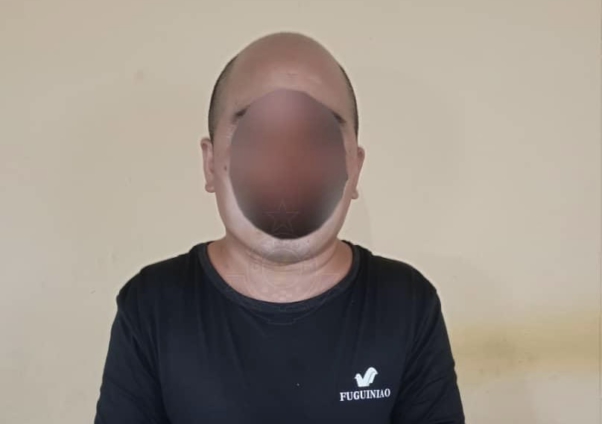 The Chinese employer who allegedly slashed the throat of a Ghanaian employee at Kweikuma in the Western Region on Wednesday is to be arraigned today.

This follows his arrest on Thursday, September 29.

The suspect (Xue Hue) was arrested for using an offensive weapon to cause harm.

“The Police have arrested a Chinese national for using an offensive weapon to cause harm to his Ghanaian co-worker at a construction site at Kweikuma suburb of Takoradi, in the Western Region,” the Police said in a press release.

According to the Police, he is currently in custody and will be put before court today [Friday, September 30].

Meanwhile, the suspect is in custody assisting the investigation and will be put before court on September 30, 2022, to face justice.

The victim, Isaac Boateng is reported to have been assaulted when he confronted his Chinese boss over unpaid salaries.

Paulichenda Engineering is a Chinese company that has been contracted to erect edifices close to the apartments of the Ghana Navy flats at Kweikuma.

Speaking to Takoradi-based Connect FM, colleagues of the victim said they have been working for months without pay.

Thus, the Ghanaian employees held a meeting where they discussed the issue and elected Mr Boateng to be their representative.

According to the other employees, it was during this encounter that tempers flared up.

“We have worked for the whole month and our salaries had not been paid so we had a meeting and one of our colleagues went to the Chinese boss to find out what was wrong with the salaries because we have families and we are also owing some people,” of them narrated.

“In the heat of the argument, the Chinese boss pulled a flick knife and slashed the throat of our colleague. He has incurred deep wounds, blood traces could be seen everywhere,” he added.

DISCLAIMER: The Views, Comments, Opinions, Contributions and Statements made by Readers and Contributors on this platform do not necessarily represent the views or policy of Multimedia Group Limited.
Tags:
Chinese
court
Police