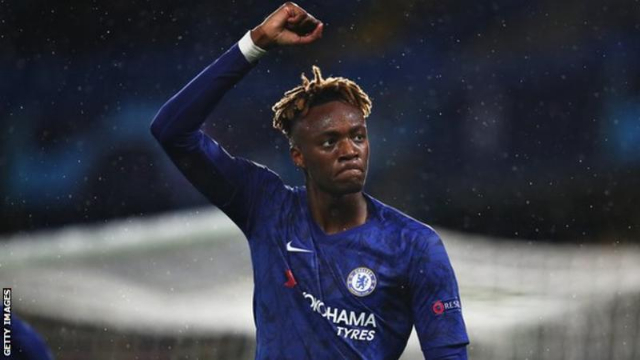 Chelsea narrowly defeated Lille 2-1 at the Stamford Bridge courtesy first half goals from Abraham and Azpilicueta. Ajax needed to draw or win against Valencia to qualify to the knockout round but a goal from Rodrigo was enough to sink the Amsterdammers. Inter Milan also lost to a weakened Barcelona side at the San Siro after Ansu Fati scored a late winner to give the La Liga leaders a 2-1 win.

Chelsea survived a late scare to move into the Champions League knockout stages with victory over Lille at Stamford Bridge.

Frank Lampard’s side were in complete control for the most part and set up the victory they required with first-half goals from Tammy Abraham and Cesar Azpilicueta.

Chelsea’s nerves were frayed when former striker Loic Remy pulled one back for Lille late on but they were able to close out victory to reach the last 16 after finishing a tough group in second place behind Valencia but ahead of last season’s semi-finalists Ajax.

Abraham scored his 13th goal of the season after 19 minutes when he turned in Willian’s cross from close range while Azpilicueta headed in from Emerson’s corner 10 minutes before the break.

Lille, with nothing but pride to play for and with a much-changed team, barely threatened until Remy’s late strike but Chelsea saw out the win to complete the first phase of their Champions League assignment.

Last season’s Champions League semi-finalists Ajax were knocked out in the group stages as Valencia progressed instead with victory at the Johan Cruyff Arena.

Rodrigo scored the only goal midway through the first half as he blasted into the roof of the net from Ferran Torres’ clever pass.

Valencia had defender Gabriel sent off in injury time for clashing heads with Dusan Tadic in a very tense finale in Amsterdam.

Ajax were seconds away from reaching last year’s final before Lucas Moura’s injury-time strike sent Tottenham to the final instead.

Frenkie de Jong and Matthijs de Ligt were among the stars of that team to leave last summer and they have not been the same since.

Two defeats at home – by Chelsea and Valencia – and a 4-4 draw at Stamford Bridge have ultimately cost them.

Valencia go through as group winners, with Chelsea in second after their 2-1 win over Lille.

Inter Milan crashed out of the Champions League on Tuesday after 17-year-old Ansu Fati became the youngest scorer in the competition’s history by firing in a late winner to give Barcelona a 2-1 victory at San Siro.

The Italians needed to match or better Dortmund’s result against Slavia Prague in order to progress but their loss coupled with the Germans’ 2-1 win ensured a disappointing end to their UCL campaign.

Barca coach Ernesto Valverde rested Lionel Messi and several other key players for the trip to Milan, having already secured top spot in Group F, but Carles Perez put the Spaniards in front on his Champions League debut after just 23 minutes.

Inter found a lifeline just before half-time when Romellu Lukaku latched onto a Lautaro Martinez layoff just outside the box and beat Barca keeper Neto after his powerful left-footed shot deflected off a defender.

The hosts twice had the ball in the net in the second half but had the goals rightly disallowed for offside. And their bad timing was punished three minutes from the final whistle when Ansu Fati struck just seconds after coming on as substitute — the teenager beating Handanovic from outside of the box with a sensational right-footed to make history.

The result put Barcelona top of the group with 14 points, while Dortmund finished second with 10. Inter were third with seven points and Slavia ended with two.