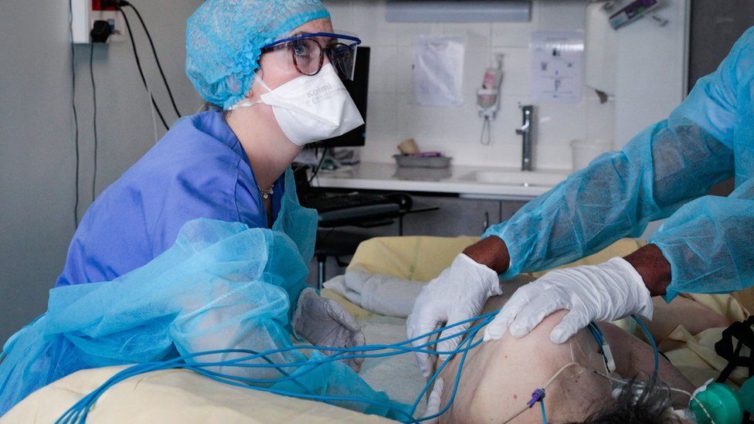 France has announced tighter Covid restrictions amid concerns over the Omicron variant.

From 3 January, remote working will become compulsory for those who can and public gatherings will be limited to 2,000 people for indoor events.

The news comes as France recorded more than 100,000 new infections on Saturday – the highest number reported in the country since the pandemic began.

But France’s prime minister did not bring in a New Year’s Eve curfew.

Countries across Europe are tightening restrictions as infections rise and the new Omicron variant spreads through the continent.

Studies suggest the strain is milder than Delta, with a 30% to 70% lower chance of infected people ending up in hospital. But there are fears the sheer number of cases could overwhelm hospitals.

‘A film without an ending’

French Prime Minister Jean Castex told reporters the pandemic felt “like a film without an ending” as he unveiled the new measures at a news conference following a crisis cabinet meeting.

The new rules also include limits on outdoor public gatherings – which will be restricted to 5,000 people – and a ban on eating and drinking on long distance transport.

Nightclubs will remain closed until further notice and cafés and bars will be able to provide table service only. Employees who work from home will have to do so at least three days a week. Mask-wearing will become compulsory in city centres.

The government is also shortening the length of time between booster shots from four months after the last vaccination to three months.

France’s planned vaccine pass – which will require proof of vaccination, not just a negative test, to enter public spaces – will come into effect from 15 January, if parliament approves a draft bill.

But Mr Castex did not introduce a full lockdown or New Year’s Eve curfew. Schools will also reopen as planned on 3 January.

According to the country’s coronavirus dashboard, France currently has an average of more than 70,000 new daily infections.

On Monday, more than 1,600 new hospitalisations were recorded, bringing the total number of people in hospital as a result of Covid-19 to 17,000, according to data from France’s public health authority.

Elsewhere in Europe, additional restrictions were announced in Germany and Greece as governments seek to stem the tide of positive cases.

Gatherings in Germany have been restricted and gyms, swimming pools, nightclubs and cinemas will be closed to the public in several states. Private gatherings of vaccinated people will also be limited to a maximum of 10.

Local media report that at least 10 police officers were injured and around 100 protesters were arrested in the German town of Bautzen on Monday as people took to the streets to ​protest against new measures.

From 3 January, the Greek government will require bars and restaurants to close by midnight and tables will be limited to six customers. Venues will not be allowed to cater for standing customers, and if they do not comply, music will be banned in those establishments, the Reuters news agency reported.

Denmark – a country of 5.8 million people – currently has the world’s highest infection rate, with 1,612 cases per 100,000 people. Seven deaths were recorded in the last 24 hours. It has closed cultural attractions and limited opening hours in bars and restaurants in a bid to stem new infections.

And before Christmas, Iceland cut the number of people allowed at gatherings amid soaring case numbers. Until mid-December the island nation had never reported more than 200 daily cases, but in the past 24 hours it has registered a record 672 infections.

In contrast, in the UK, the Health Secretary Sajid Javid has said no further Covid restrictions will be implemented in England before the new year. But he said people should “remain cautious” and celebrate outside on New Year’s Eve if possible.

Both England and Scotland reported record cases over Christmas.