Leaked documents detail for the first time China’s systematic brainwashing of hundreds of thousands of Muslims in a network of high-security prison camps.

The Chinese government has consistently claimed the camps in the far western Xinjiang region offer voluntary education and training.

But official documents, seen by BBC Panorama, show how inmates are locked up, indoctrinated and punished.

The leak was made to the International Consortium of Investigative Journalists (ICIJ), which has worked with 17 media partners, including BBC Panorama and The Guardian newspaper in the UK.

The investigation has found new evidence which undermines Beijing’s claim that the detention camps, which have been built across Xinjiang in the past three years, are for voluntary re-education purposes to counter extremism.

About a million people – mostly from the Muslim Uighur community – are thought to have been detained without trial.

The leaked Chinese government documents, which the ICIJ have labelled “The China Cables”, include a nine-page memo sent out in 2017 by Zhu Hailun, then deputy-secretary of Xinjiang’s Communist Party and the region’s top security official, to those who run the camps.

The instructions make it clear that the camps should be run as high security prisons, with strict discipline, punishments and no escapes.

The memo includes orders to:

The documents reveal how every aspect of a detainee’s life is monitored and controlled: “The students should have a fixed bed position, fixed queue position, fixed classroom seat, and fixed station during skills work, and it is strictly forbidden for this to be changed.

“Implement behavioural norms and discipline requirements for getting up, roll call, washing, going to the toilet, organising and housekeeping, eating, studying, sleeping, closing the door and so forth.”

Other documents confirm the extraordinary scale of the detentions. One reveals that 15,000 people from southern Xinjiang were sent to the camps over the course of just one week in 2017.

Sophie Richardson, the China director at Human Rights Watch, said the leaked memo should be used by prosecutors.

“This is an actionable piece of evidence, documenting a gross human rights violation,” she said. “I think it’s fair to describe everyone being detained as being subject at least to psychological torture, because they literally don’t know how long they’re going to be there.” 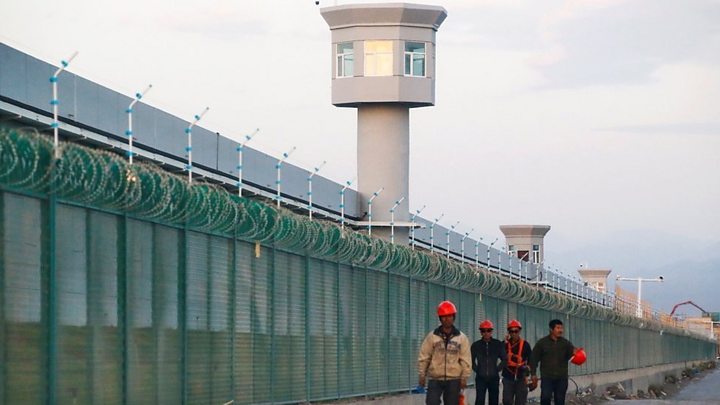 The memo details how detainees will only be released when they can demonstrate they have transformed their behaviour, beliefs and language.

“Promote the repentance and confession of the students for them to understand deeply the illegal, criminal and dangerous nature of their past activity,” it says.

“For those who harbour vague understandings, negative attitudes or even feelings of resistance… carry out education transformation to ensure that results are achieved.”

Ben Emmerson QC, a leading human rights lawyer and an adviser to the World Uighur Congress, said the camps were trying to change people’s identity.

“It is very difficult to view that as anything other than a mass brainwashing scheme designed and directed at an entire ethnic community.

“It’s a total transformation that is designed specifically to wipe the Muslim Uighurs of Xinjiang as a separate cultural group off the face of the Earth.”