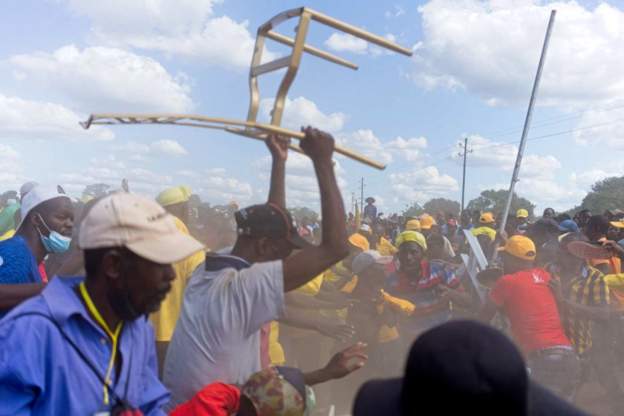 At least one person was killed and 10 others injured in skirmishes at an opposition party rally in Kwekwe, central Zimbabwe, on Sunday.

The Citizens Coalition for Change (CCC) supporters were attacked by a group of men armed with spears, machetes, iron bars and stones.

One man was stabbed to death, others suffered broken bones and various injuries, according to party officials.

The party blamed President Emmerson Mnangagwa’s supporters for the violence, a charge the ruling party rejected.

It comes as rights groups warn of increasing violence ahead of crucial by-elections scheduled for 26 March.

Rights groups have warned of inflammatory language in the campaigns.

Over the weekend the country’s vice-president warned that the opposition would be crushed like lice, sparking fears of new violence.

On Saturday police used teargas and water cannons to disperse another CCC rally that had been okayed by the High Court.

Some 28 parliamentary and 122 council seats are up for grabs. The by-elections are seen as a test for the ruling Zanu-PF party ahead of general elections scheduled for 2023.

The pre-election period has already been marred by claims of anomalies in the voters’ roll, of a partisan police and media bias.