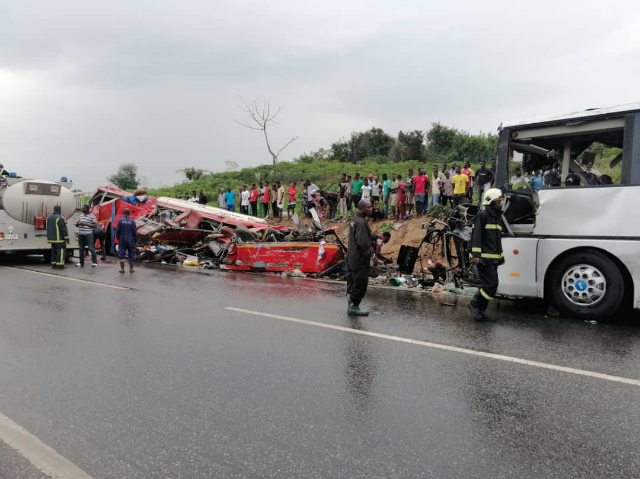 A survivor of the Dompoase junction accident on the Cape Coast-Takoradi highway has revealed that he saw a truck run over victims lined up on the road after the accident.

Charles Osei said he was on the road helping one of his colleagues who at that moment was injured and could not walk properly but they had to stop and find refuge in a nearby bush to save themselves from the speeding truck.

“I saw the car coming so I had to run. Each and everyone was rushing to save himself…no one could help anyone,” he told Joy FM’s Maxwell Agbagba.

Thirty-five people died with many others injured in an accident that happened at 12:15 am Tuesday, on the Cape Coast-Takoradi Highway.

Police reported 29 people died on the spot while five others died at the Cape Coast Teaching Hospital.

The accident involved Yutong and Hyundai buses which collided head-on at Dompoase near Komenda Junction.

According to the police, the Yutong bus travelling from Accra to Takoradi tried to overtake the vehicle in front of it and ended up running into the oncoming white Takoradi to Accra bound Hyundai bus.

“We were coming from Takoradi to Accra and I heard some noise within a minute, our car had crashed with another bus.

“I saw blood coming from my nose, my mouth. The next moment, I was under the seats. So I came out and I realised that a lot of people had passed away,” Charles further narrated.

The surviving driver of one of the two buses involved in the fatal crash Mark Mireku has been remanded into police custody.

“The Hyundai bus driver was treated and discharged yesterday [Thursday]. He was immediately picked up and detained,” COP Awuni told the media.

Mr Mireku has been charged with careless and inconsiderate driving and made his first appearance in court on Friday, January 17, 2020.

No more lives have been lost from the accident, however, 14 of the victims are still on admission responding well to treatment.