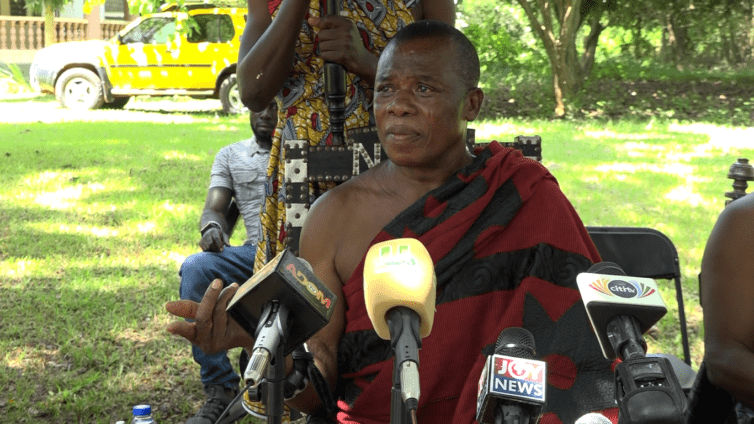 All 44 towns and villages in Drobo, led by the paramount chief, Okokyeredom Sakyi Ako II, have thrown their support behind the Anti LGBTQ+ bill before the parliament of Ghana.

They described the practice as alien and unacceptable with their traditions and culture.

The Drobo state meets every quarter to deliberate on issues of concern. But key on the agenda on Tuesday was the Anti LGBTQ+ bill for the chiefs, assembly members, youth leaders, and identifiable groups in Drobo to express their opinions.

Addressing the media at Drobo after the deliberations, Okokyeredom Sakyi Ako II, said they are fully in support of the bill.

“We cannot allow our culture to be derailed by this. It is purely alien to us. It is not in our culture. Our religious beliefs as Christians, Muslims, or traditional religion, it is not in us to practice such acts”, he explained.

He described the acts of gays and lesbians as an abomination and unacceptable in their communities, hence Droboman’s unanimous consent to the bill, which would curtail the activities of the LGBTQ+ community.

The Anti LGBTQ+ Bill has generated reactions for and against it. But religious leaders continue to lead the charge for its approval in parliament.

The chiefs and people of Drobo have also issued a strong warning to their Member of Parliament (Jaman South constituency), Williams Okofo Darteh, to fully represent their blessing for the bill in parliament.

“We have warned our parliamentarian that he is to carry on with what we have sent him to do. This is what Droboman wants him to do. If he goes to do the contrary, then he has lost faith in us, and we will also lose faith in him, and come to the next elections, we would decide on this”, the chief stated.

Okokyeredom Sakyi Ako II, however, said they have their way of cleansing people who commit what he called abominable acts.

Such crimes, he explained, “are against the earth, God, and our ancestors”, and has, therefore, “informed all the chiefs to bring to our notice of any such acts so that the right rituals would be performed to cleanse the land, the ancestry, God, and the offender”.

Okokyeredom Sakyi Ako II, who is also the Vice President of the Bono Regional house of chiefs said traditional councils are expected to make their pronouncement on the bill, which would culminate into a regional and a national force in support of the bill and against any individual or group that would seek to oppose the bill.

Queen-mother of Faaman, Nana Akua Ferkaa II, believes parents must get involved and educate the children of their cultural norms.

She believes this will avert the situation where they grow, learn things from the internet, and are brainwashed by others to feel sexually attracted towards the same sex.

DISCLAIMER: The Views, Comments, Opinions, Contributions and Statements made by Readers and Contributors on this platform do not necessarily represent the views or policy of Multimedia Group Limited.
Tags:
Anti LGBTQI+Bill
Droboman