E-levy Bill: In Europe, we pay taxes peacefully, but when in Ghana, we want to change – Ken Ofori-Atta 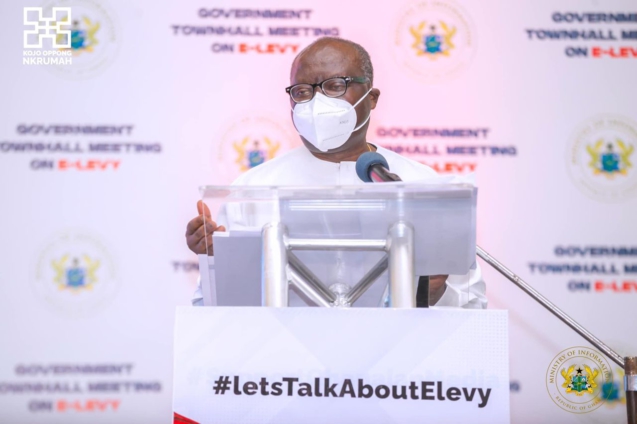 Finance Minister, Ken Ofori-Atta, has reiterated the need for citizens to honour tax obligations, required by the State.

Responding to questions at a town hall meeting in Sekondi, he highlighted some of the benefits of taxes, and charged citizens to refrain from dodging the payment of taxes.

He therefore stressed that, the E-levy is one of such taxes designed to help mobilise revenue for development, hence citizens should rally behind its implementation.

“If you look in our tax books, there’s a dispensation known as ‘gift tax’; which implies that when somebody gives you a gift, just like in Europe where you cannot hide, you pax a tax on the gift. As to what you do with the gift is nobody’s concern. And that’s why I reiterated the fact that, blissful projects are enabled by money. When we go to Europe, we run and pay our taxes in peace, yet when we come to our own home country, then we want to change our behavior. Of a truth, we must be accountable and transparent. We don’t have to change”, Ken Ofori-Atta advised.

JoyNews/AdomNews · In Europe, we pay taxes peacefully, when in Ghana, we want to change – Ofori-Atta

The Finance Minister’s admonition was part of a series of appeals he made to citizens to embrace government’s 1.75% E-levy tax. In his submissions, he dismissed claims that the E-levy will affect businesses and deepen hardship in the country.

The townhall meeting in Sekondi, is part of efforts by government to sensitize Ghanaians on the essence of the policy, and inform citizens of the various dynamics and intricacies regarding the Bill.

Meanwhile, a finance lecturer at the University of Ghana Business School (UGBS), Professor Lord Mensah, has downplayed the relevance of government’s 1.75% E-levy proposal.

According to him, the policy will rather discourage citizens from using digital platforms for the daily monetary transactions.

Speaking in an interview with Emefa Apawu on Joy FM on Wednesday, the finance expert reiterated the need for government to rationalise its expenditure in order to salvage the economy.

In his view, government must take note of its available resources and spend accordingly.

“If you look at projections into the future, obviously you may have to look at the possible uncertainty that may arise as a result of a certain economic decision. We are just prompting the President that if you put the E-levy at a certain threshold, there’s a tendency that you’ll discourage people from using the platform.

And so we are giving the possible scenario that the economy may face in case we should introduce this E-levy. But then also, the attitude from the stables of government give the indication that we don’t want to manage as a country. Because a country that wants to manage, possibly, you’re looking at how you can allocate the scarce resources that you have. And with the attitude, we’re portraying, it is as if we have the resources, and therefore we must tap into it”, Professor Mensah stated.

DISCLAIMER: The Views, Comments, Opinions, Contributions and Statements made by Readers and Contributors on this platform do not necessarily represent the views or policy of Multimedia Group Limited.
Tags:
E-Levy Bill
Ken Ofori-Atta
Sekondi Townhall Meeting