Ejura clash: We miscalculated and we take responsibility for that – Deputy Regional Police Commander admits 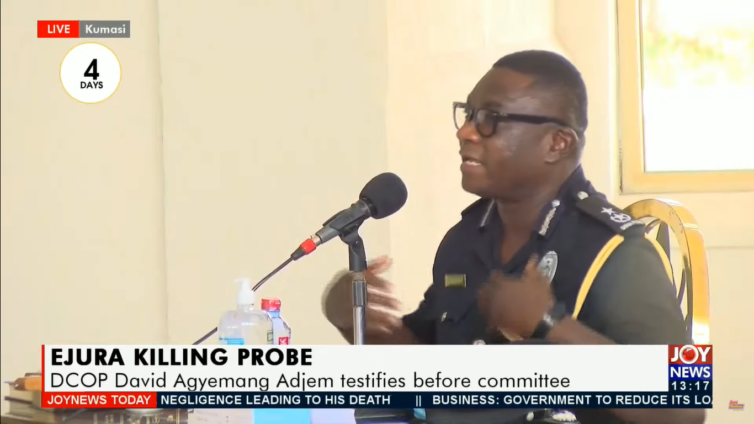 The Deputy Ashanti Regional Police Commander, DCOP David Agyemang Adjem, has admitted that security operatives deployed to quell the Ejura protest on June 29 might have miscalculated the situation.

Appearing before the three-member committee investigating the disturbance which led to the death of two and injuries to four others last Tuesday, he said although the police had intel of a rampage, some lapses were recorded during the operation.

“I think the coordination was good, albeit the execution wasn’t perfect,” DCOP Adjem admitted.

Explaining why the military was included in the crowd management operation, the Deputy Regional Commander stated that it was the expectation to scare the protesting youth who were best described as “rioters”.

Citing previous incidents, DCOP Adjem said the rioters often disperse upon the arrival of the soldiers.

“In the past, we’ve had incidents, anytime they had seen the military, normally they would calm down, and some level of peace would have been restored, but this time I think we miscalculated, and we take responsibility for that,” DCOP Adjem said.

He further noted that the Police Service did not expect the situation to escalate following the involvement of the soldiers but added that the decision was in line with their standard operating procedure.

“We didn’t anticipate that it would degenerate into shooting. Our objective was first to protect lives and property and to maintain law and order.”

A three-member committee has been set up after President Akufo-Addo gave the Interior Minister, Ambrose Dery, 10 days to provide a detailed report of the inquiry, which also led to the death and injury of some residents in Ejura.

The deceased met their untimely death while demonstrating against the murder of their colleague, Ibrahim Mohammed, also known as Kaaka, which had occurred a few days before the disturbance.