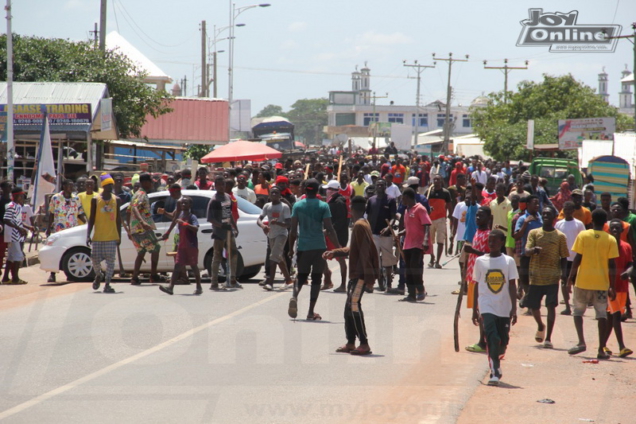 The Ministerial Committee of Inquiry tasked to probe the Ejura disturbances in June, 2021 has recommended the immediate transfer of the District Police Commander for incompetence in handling the security situation in the area.

In a 55-page report submitted to the Interior Minister and sighted by JoyNews, the Justice Koomson Committee said that DSP Philip Kojo Hammond’s relationship with the Ejura residents has turned sour, thus not prudent for him to be at post.

“The Committee recommends the immediate transfer of the District Police Commander of Ejura, DSP Philip Kojo Hammond, first for his incompetence in handling the situation and for the fact that, his relationship with the community seems to have been damaged beyond repair,” the report said.

Presenting its findings, the Committee stated that there was no basis for the dispatch of a Police Riot Vehicle (water canon) to the cemetery on the morning of June 29 when the slain social media activist was being buried.

According to the report, the decision to deploy the riot vehicle was tantamount to provocation.

Testifying before the Committee, both Deputy Ashanti Regional and Ejura District Police Commanders told the three-member body that the deployment was on the request of Kaka’s family; a claim the family denied.

The Police commanders could not tell the Committee the name and particulars of the said family member who made this request.

The Committee also revealed that there was no need for the security personnel who were deployed in Ejura to restore calm on the 28th June, to have left Ejura in the early hours of 29th June. The Committee finds that this created a security vacuum in the town.

The Justice Koomson Committee said it is convinced that, having withdrawn the security personnel deployed on the June 28 from Ejura, the District Police Commander failed in his duty to adequately brief his superiors in the Divisional and Regional level to beef up the personnel and logistics in anticipation of any eventualities on June 29.

It added that, if it was in fact true that “Kaaka’s” family requested for security during the burial, as alleged by the District Police Commander, there should have been an adequate signal to the District Commander to have immediately requested for the necessary logistics and personnel to deal with any unwarranted situation.

Rather, the District Commander decided to deploy the Riot Vehicle to the cemetery.

The Committee found the District Commander to be incompetent and ill-prepared for the occasion.

It further revealed that the Police did not work on their intelligence sharing. It failed to prepare for the situation on the ground and over relied on the Military personnel; thereby failed to organise adequately in terms of personnel and equipment.