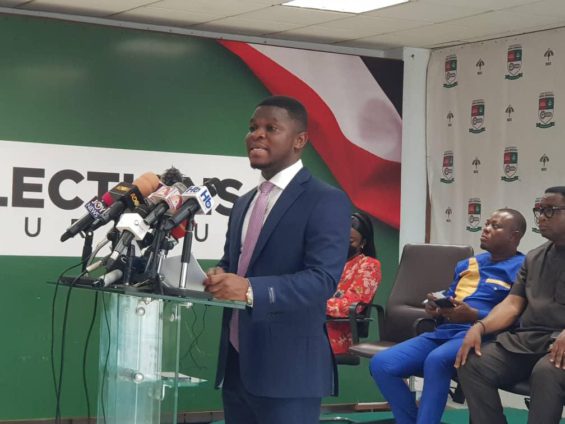 The National Democratic Congress (NDC) has criticised the Justice Koomson Committee’s Report on the Ejura disturbances for failing to recommend punitive sanctions to persons whose actions were found to have caused the mayhem and deaths.

It said the “mere” transfer of some police officers, as well as the referral of soldiers whose actions led to the death of two persons, to the military establishment for review considerations were not punitive enough to bring some comfort to the affected families.

Addressing a news conference in Accra on Tuesday, Mr Sammy Gyamfi, the National Communications Officer of the Party, said appropriate sanctions must, therefore, be immediately applied to all persons found culpable.

He demanded the immediate dismissal of Deputy Superintendent of Police (DSP) Philip Kojo Hammond, Ejura-Sekyeredumasi Police Commander, whose conducts, he said, provoked the Ejura disturbances and triggered the shooting and killing of the two persons.

The Committee, in its Report released on September 27, recommended the immediate transfer of DSP Hammond, over what it said was his incompetence in handling the situation and for the fact that his relationship with the Community seemed to have been damaged beyond repair.

But the NDC National Communications Officer said more punitive and deterrent sanctions, such as demotion or outright dismissal, would have been appropriate to bring some comfort to the affected families and serve as off-putting to others.

He asked: “Transferring a Police Officer to another station in the same capacity and rank can never constitute disciplinary action. How on earth can a mere administrative transfer, which have been touted as routine exercises of the security agencies, be recommended for a senior Police Officer whose unprofessional conduct has caused the death of two Ghanaians and injuries to many?”

Mr Gyamfi added that the Committee, having also established that the deployment of soldiers to Ejura was improper, one would have expected that it would recommend sanctions for those responsible for the wrongful deployment.

That, he said, was unfortunate and called for the dismissal of Mr Simon Osei Mensah, the Ashanti Regional Minister, as well as Commander of the 4th Infantry Battalion and General Officer Commanding, Central Command, Kumasi, for the wrongful deployment of the soldiers to Ejura.

Also, he alleged that attempts by the Committee to link the death of Mr Ibrahim Muhammed, alias, ‘Kaaka”, a social activist whose death sparked the disturbances, to a family feud smacked of an attempt to cover-up for the real perpetrators.

“The Report is full of guilty findings, flawed conclusions and deficient recommendations, calculated to shield from the accountability the murderers of a social activist, Ibrahim Muhammed, aka, ‘Maacho Kaaka’…,” he alleged.

In July 2021, President Nana Addo Dankwa Akufo-Addo asked the Ministry of the Interior to initiate a public inquiry, following the killing of two persons and four others being injured by soldiers during a protest against the death of Kaaka.

The Committee, in a 55-page Report, made 10 recommendations for consideration by the Government.

Among these are the need for the Military Establishment to review the actions led by Lieutenant Martin Opoku Adusei for the inappropriate use of force, and apply appropriate sanctions, training of REGSEC, MUSEC and DISEC officials in the Ashanti Region in Conflict and Crises Management at the Ghana Armed Forces Command and Staff College at least once every year.

The rest are the development of a joint Standard Operative Procedure (SOP) for Military/ Police operations, including roles for indispensable allied agencies like the National Investigations Bureau, NADMO, Ghana National Fire Service, and the National Ambulance Service.

It said the National Commission for Civic Education should intensify its public education in relation to the rights, obligations and civic responsibilities of the people of Ejura.

DISCLAIMER: The Views, Comments, Opinions, Contributions and Statements made by Readers and Contributors on this platform do not necessarily represent the views or policy of Multimedia Group Limited.
Tags:
Ejura disturbances
Justice Koomson Committee
National Democratic Congress
Sammy Gyamfi