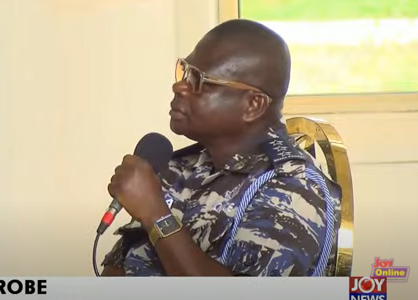 The District Commander of Police for Ejura, DSP Philip Hammond, says the protesting youth in Ejura demanding justice for the murder of activist, fired a pump-action gun during the protest last Tuesday.

He told the three-member Committee to probe the Ejura incident on Wednesday, DSP Philip Hammond revealed that he did not see the protestors fired the pump-action gun, however, he heard the sounds.

“Did you personally see the youth or demonstrators or rioters holding these weapons?” the Committee asked.

DSP Philip Hammond replied stating: “I didn’t see but I heard the sound. They were firing, I heard the sound of the pump-action gun but the missiles, stones and other offensive weapons, they were throwing them.”

To ensure calm was restored, the DSP disclosed that he ordered the riot control van to spray the rioters with hot water.

However, this initiative was unsuccessful as the mob “were not perturbed and started throwing stones and the situation became so tense.”

According to the District Commander, about 600 to 800 youths had hit the streets of Ejura and controlling them was difficult.

When matters had escalated, some of the protestors directed their attention to the police station, hence he signalled the riot control van to change its course.

DSP Philip Hammond revealed that at that point, the military took charge while the police retreated to its station.

“Later, we realised that the angry mob had taken over the whole place. Some had diverted their routes to our side, both left and right and others behind us.

“Some were saying let’s go back to the police station. So I instructed the root control van to turn and then police retreated for the military to take over while we also continue to the charge office where some of the angry mob were almost at,” he stated.

On June 28, the youth of Ejura Sekyeredumase hit the streets to protest the murder of Ibrahim Mohammed but the demonstration turned turbulence when the group encountered the police and military.