Election 2020: The wind of victory is blowing massively for NPP in Hohoe - Herbert Krapa - MyJoyOnline.com

Election 2020: The wind of victory is blowing massively for NPP in Hohoe – Herbert Krapa 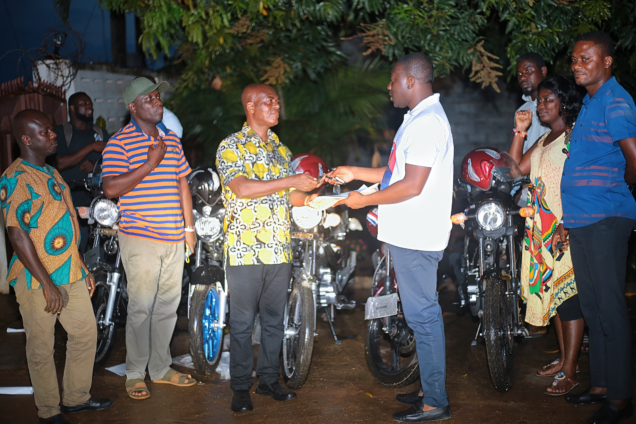 Government’s spokesperson on Governance and Legal affairs, Herbert Krapa has said that Hohoe has enjoyed major developmental projects under the Akufo-Addo-led administration in the past 4 years.

Mr Krapa who was speaking at Hohoe while donating 5 motorbikes to the constituency, noted that Hohoe has benefited immensely from the efforts of the Energy Minister John Peter Amewu in the constituency.

Mr Krapa stated that before the NPP came to office in 2016, Hohoe had little or no development but could now boast of major road projects, an ultramodern sports stadium, schools, markets, street lights and much more.

According to Mr Krapa, it is only prudent that the people of Hohoe show appreciation to the NPP by voting for both President Akufo-Addo and John Peter Amewu for more developmental projects.

“I entreat all of you to massively vote for the NPP for the complete transformation of Hohoe into the city you have always dreamt about,” Mr Krapa said.

Mr Krapa who started his campaign tour in the region with the distribution of motorbikes in the Oti and Volta Regions is confident that the NPP has gained grounds in these two regions as compared to what was before, and will therefore win the 2020 election.

He urged the people of the two regions to give the NPP 4 more years for more fruitful years of development.

The Hohoe Constituency Chairman on his part was grateful for the donations and support and assured that the motorbikes will be put to good use.

The chairman said a lot of infrastructural projects have been done by the Energy Minister and there is the need for the people to support him with votes.

John Peter Amewu, described as the ‘Messiah of Hohoe’, stated that the developmental changes enjoyed by the people of Hohoe should be reciprocated by a vote for the NPP in the December elections.

Mr Herbert Krapa has been touring constituencies in both Volta and Oti helping the constituencies and parliamentary candidates to embark on community campaigns to secure victory for the NPP in the 2020 General Elections.