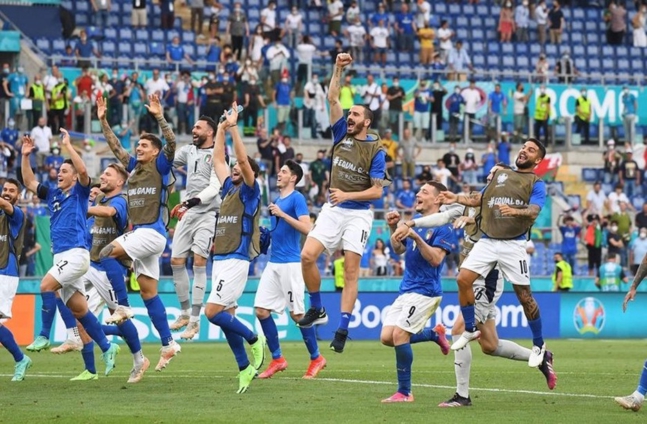 The Azzurri’s had a lot of talk and controversy with the decline in the quality of players between 2016 and 2018.

After their 1-0 loss to Sweden in their final qualifying game for the World Cup, Andrea Barzagli, Daniele De Rossi, Giorgio Chiellini, and captain Gianluigi Buffon who were leaders in the dressing room declared their retirement from the national team.

It wouldn’t take long for one of the trios to rescind his decision. Following the appointment of Roberto Mancini in 2018, Chiellini returned to the setup and has been an influential member within the team as Mancini continue build a formidable group and implement his system and tactics perfectly.

The 2006 World Cup champions have been in fine form since the appointment of the former Manchester City manager. They have gone 12 consecutive games without conceding a goal in regulation time. They are on a 30-game unbeaten run, in which they have 33 goals scored and 11 consecutive clean sheets.

To put this in context, Italy has not conceded a goal since October 2020. In their round of 16 tie against Austria, their backline was broken for the first time, but this was after 90 minutes as the game went into extra time

Before entering the tournament, the Italians were given 12-1 odds to win the competition by ESPN but with how they have played, how organized they have looked on the pitch; this team is gradually turning into tournament favourites.

The Azzurri’s have already booked their place in the knockout stages of the competition and have scored nine goals in four matches and conceded one.

Mancini, a premier league winner with Manchester City, sets his side up in his preferred 4-3-3 formation, a system that suits the skill set of his players. Considering the limited time national team coaches have with their players, these Italians have defied the myth of needing more time to build a team that appreciates the quality of individuals. He has been able to blend the team perfectly, combing a mixture of experience and youth.

In the midfield of Jorginho as the deep playmaker, Barella and Verratti as box-to-box, the fluidity in movement and tempo in passing feels just right. As a result of Verratti being injured, Manuel Locatelli has taken up that role and has played it perfectly. The midfielder who had a superb season with Sassuolo has carried that form into the national team in the euros, scoring two goals in two games played.

Aside Locatelli who plays in a deep midfield pivot role in Sassuolo, all other players in the Italian starting eleven play at their natural positions for their respective clubs, which makes Mancini’s system easy to operate and organize.

Upfront, Italy have been deadly on attacks. With Insigne, Immobile and Berardi leading the line. The 2006 world cup champions have looked unstoppable in the final third with each having an assist and Immobile scoring two goals in two games played. Heading into the tournament, the Lazio striker had 20 goals and six assists in 35 games; and the previous season, he registered 36 goals and nine assists in 37 games.

The 31-year-old who has been in fine form is the star man for the Italian side. Insigne has equally been influential for Napoli from the left wing. The right footed attacker scored 19 goals this season in the Serie A and played a major role in Napoli’s Europa League qualification. Berardi who is teammates with Locatelli has also scored 17 goals this season.

These numbers suggest Italy have the fire power to beat any opponent in this competition. It might be too early, but these Azzuris could just be walking the path of the team that won the World Cup 15 years ago.

Italy’s days of emotional distraught because of the country’s supposed bad form that led to the period in which they missed out on making the World Cup, could be coming to an end as the Azzuri’s might just repair their image and win back the love of their fans by winning the tournament as well as prove to the world wrong for doubting them before the kick start of the tournament.

But, before this can be achieved, Belgium, one of the countries pundits say has the potential of winning the tournament stands in their way. The Red Devils, with its golden generation of stars have the quality to extend Italy’s misery but a win over them sets a tone for a semi-final place and a potential ticket to the final.

The Belgians parade a luxury of stars, notably Manchester City’s Kevin De Bruyne, Real Madrid’s Eden Hazard, Inter Milan’s Romelu Lukaku, and a host of others who could influence the outcome of a match within a second.

In four matches played in the ongoing Euros, the Red Devils have won all, scored seven goals, and conceded just one. The most recent highlight of Belgium’s journey was that goal by Thorgan Hazard from long range to knock defending champions Portugal, out of the tournament.

Injuries to Kevin De Bruyne and Eden Hazard could have effects on their upcoming game against Italy, and with the quality and confidence with which the Italians play, they could be ending the stay of the Red Devils and book a place in the last four.

DISCLAIMER: The Views, Comments, Opinions, Contributions and Statements made by Readers and Contributors on this platform do not necessarily represent the views or policy of Multimedia Group Limited.
Tags:
Euro 2020
Italy
Roberto Mancini