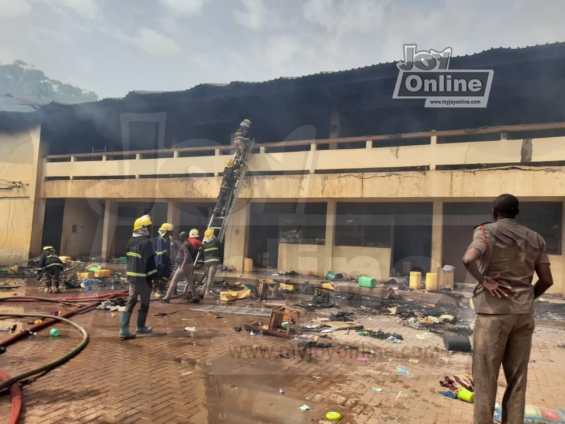 Tolon Senior High School has been temporarily closed down after fire guttered the school’s girls’ dormitory.

The fire which started at about 9:00am Thursday morning, destroyed the entire top floor of the girls’ dormitory occupied by over 600 students.

The decision to close down the school, was reached after an emergency meeting to allow the students to go home for a week while school authorities make alternative arrangements.

A student, Dauda Zakiya who lost all her belongings could not hold back her tears. “I have lost everything, this bag is the only thing I have”, she said.

Zakiya said she had to support her parents to be able to buy the list of items on the prospectus before she came to school.

“It wasn’t easy for my father to buy me these things. They bought some and I also bought some, I was selling dates during the fasting season”, she added.

The Headmaster of the school, Mohammed Issifu said the decision to temporarily close down the school was to afford the authorities some time to make alternative arrangements for the students.

He said the decision was reached in consultation with major stakeholders. Mr. Issifu said the upper part of the dormitory houses 647 female students, adding that they are looking at converting some classrooms and a compound house belonging to the Assembly as hostels when they resume.

“The Assembly has a compound house in town and with the school’s situation, we are trying to see if we can convert some of the classrooms into dormitories but we need time”, Mr. Issifu said.

Public Relations Officer of the Ghana National Fire Service, Baba Hudu said the fire was so intense that they had to dispatch several other fire tenders to the school to be able to bring the fire under control.

He said the entire first floor of the building was damaged.

Mr. Hudu added that several properties of the students were destroyed and that two female students collapsed, but were resuscitated by the ambulance team.

According to Mr. Hudu, they have advised authorities of the school to get experts to assess the block before they take a decision to reconstruct the building.

He further lamented over the number of speed tables on the Tolon road, saying it hindered their travel from Tamale to Tolon.

“The extent of damage was because of the distance, we all know that Tolon has not got a fire station even though the Assembly has built one, and is yet to be handed over to us. The speed ramps on the road, we could count up to 23”, he said.