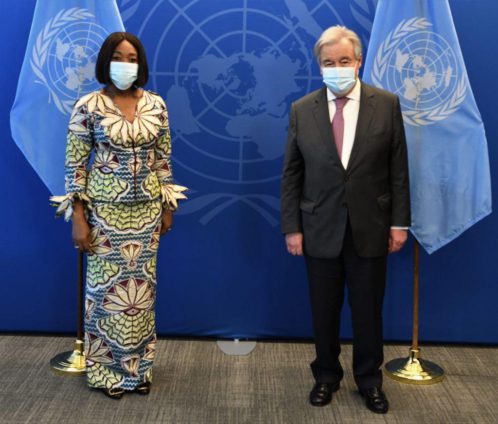 Ghana’s Minister for Foreign Affairs and Regional Integration on Tuesday held discussions with the UN Secretary-General, Antonio Guterres on the security situation in the Sahel and West Africa.

It is the first meeting since Ghana took a seat on the 15-member Security Council on January 1, 2022.

Ghana was elected in June last year for two years, alongside Brazil, United Arab Emirates, Gabon and Albania to join five other non-permanent members, including Kenya, who have a year left of their tenure.

Restoring peace and security in the Sahel and West Africa, and ending piracy in the Gulf of Guinea are two of the major problems on the continent, which Ghana wants to galvanize the Security Council’s attention and international resources to resolve.

Ghana chairs the African Union (AU) Peace and Security Council as well as the Council of Ecowas Heads of State.

Ms. Botchwey also participated in the UN Security Council’s first debate of this year, the maiden one for Ghana in this fourth tenure on the Council since independence in 1957.

The debate on “Women, Peace and Security,” presided over by Norwegian Foreign Minister, Anniken Huitfeldt, addressed the threats and violence women in particular faced when, ironically, they were working for peace.

In 2020, the Office of the UN High Commissioner for Human Rights (OHCHR) verified 35 cases in which women involved in peace and security work were killed.

Ms. Botchwey said Ghana is concerned that those who gave their time to make the world a better place are rather threatened. “The Council can always count on Ghana’s unwavering support,” she assured.

The Foreign Affairs Minister said the Ghana Armed Forces and other security institutions are reviewing regulations to ensure that they are women-friendly.

The topic for the debate is of particular relevance to Ghana because the country is the ninth leading contributor of personnel to UN peace-keeping operations in which an increasing number of Ghanaian women are deployed.

As of April 2020, more than a quarter of Ghanaian Police and 14 percent of its military personnel sent on UN and African Union peace operations were women.

Ms. Botchwey said, “Women are usually the most adversely affected by conflict but the most marginalised in peace processes, and the most punished for their peace-building efforts.”

“Therefore, ensuring the full, equal and meaningful participation of women in peace-building should not be reduced to mere rhetoric within the confines of the Security Council.

“We owe it to women in peace and security all over the world to convert the rhetoric into zealous and concrete action.”

Earlier in the week, Ms. Botchwey met with British Minister for Africa Vicky Ford, and Lord Tariq Ahmad, Minister for South Asia, UN and Commonwealth, in London for bilateral talks.

They discussed mutual co-operation on the Security Council, trade and investment promotion between Ghanaian and British businesses, and Covid-19 vaccine supply.

Ms. Botchwey thanked the UK government for a recent donation of 1.6 million vaccines, with the reminder that sharing vaccines is key to ending further mutations of the covid-19 virus.