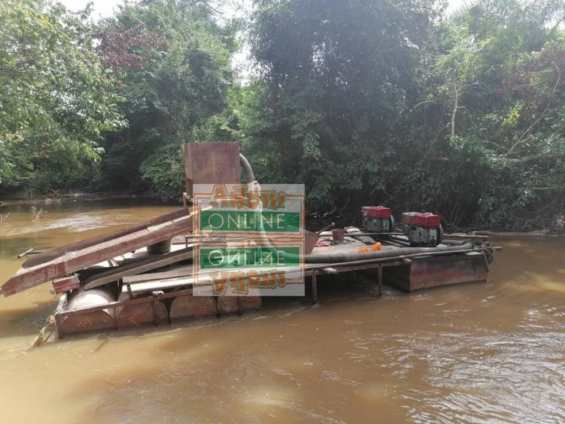 The NDC National Communications Officer, Sammy Gyamfi, has bemoaned the contamination of waterbodies as a result of illegal mining activities in the country.

He said the national canker popularly known as ‘galamsey’ has worsened under the current Akufo-Addo regime.

Speaking in an interview on the AM Show on Monday, he stated that government’s inability to deal decisively with the menace is due to the involvement of members of the ruling government in the act.

This, according to him, has depleted the quality of water bodies, in addition to other dire implications for the country.

It is because the leaders of our country today lack the political will and commitment to fight galamsey. They have never been sincerely interested in the fight since they took office”, Sammy Gyamfi lamented.

He also told host, Benjamin Akakpo that for galamsey to be a thing of the past, the President must show true commitment to the fight, instead of waxing lyrical about it.

According to him, the President’s famous promise of putting his presidency on the line to fight galamsey was a ‘scam’ and mere political talk.

In justifying this assertion, Sammy Gyamfi said contrary to the President’s remarks about rooting out the menace, he has failed to crack the whip on persons who have been implicated in the illegal mining activities in the country.

Citing an Anas investigation which implicated former secretary of the inter-ministerial committee on illegal mining, Mr Charles Bissue as an accomplice, Sammy Gyamfi said the President failed to act on the revelation.

This is his view, is part of the President’s complicity in the act.

In recent times, the issue of ‘galamsey’ has resurfaced, following the arrest of a notorious kingpin, Aisha Huang.

Her latest arrest rekindled the conversation about illegal mining and the involvement of top-flight government officials in the act.

Meanwhile, the Minister for Lands and Natural Resources, Samuel Abu Jinapor, says he welcomes the numerous suggestions from stakeholders on how to combat illegal mining in Ghana.

Speaking in an interview with Samson Lardy Anyenini on Newsfile on Saturday, he reiterated that government has done a lot in making galamsey a thing of the past.

In this regard, he stated that over the period, a series of measures have been put in place to clamp down on illegal miners and bring their activities to a halt.

Noting the gains made, he expressed readiness to embrace all the suggestions to strengthen the fight against the canker.

DISCLAIMER: The Views, Comments, Opinions, Contributions and Statements made by Readers and Contributors on this platform do not necessarily represent the views or policy of Multimedia Group Limited.
Tags:
Aisha Huang
Galamsey
Illegal mining
Sammy Gyamfi