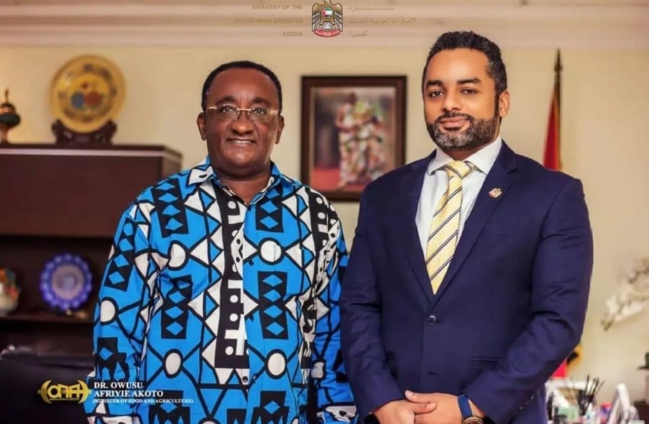 Minister of Food and Agriculture, Dr Owusu Afriyie Akoto received in his office, the Chargé d’Affairs of the Embassy of the United Arab Emirates Accra, Amer Al Alawi where they discussed the potential opportunities for a joint venture between the two countries in the agricultural sector.

The partnership is expected to bring companies from the UAE into Ghana to set up an organic fertilizer with new technology in Liquid Fertilizer.

In addition, it is also geared towards opening up more communication channels between the two countries and unify efforts in the fertilizer industry and establish Ghana as a destination market.

The collaboration between the two countries in this industry will be directed towards a harmonised market.

The meeting between the two immediately follows the inauguration of the first board of the National Fertilizer Council, in Accra by Dr Owusu Afriyie Akoto, the Minister of Food and Agriculture.

Speaking at the inauguration, the minister indicated that in terms of fertilizer application, there was a huge demand gap to be filled to meet set targets by the ECOWAS at 50 kilogrammes per hectare.

Earlier in February, the Minister was in the UAE as part of Expo 2020 Dubai where he explored various partnerships in Agriculture with UAE state and private sector players.