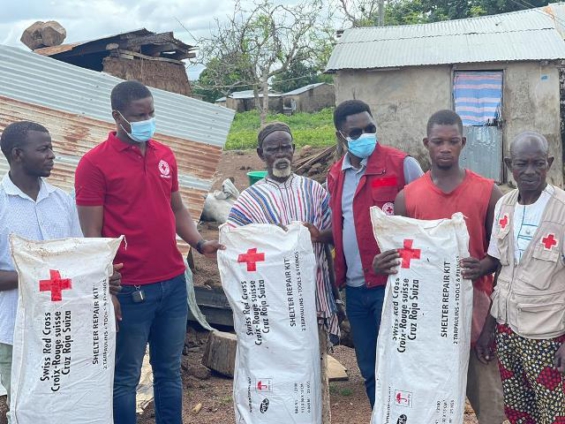 The Community Disaster Preparedness and Response Teams of the Ghana Red Cross Society have begun house-to-house education to sensitise communities along river banks in the Northern, North East and Savannah Regions.

The education is tailored to encourage community members farming along river banks, especially the Black and White Volta rivers to move to higher grounds, and safe places as the Bagre Dam is about to be spilled from neighbouring Burkina Faso.

The Ghana Red Cross Society is also making use of its community information system stationed in various communities to broadcast safety information to people in those communities, especially in the three Regions.

A team from the Ghana Red Cross Society visited some of the communities affected by last year’s floods in the Central Gonja District of the Savannah Region and in the North East Region to ascertain their preparations towards the floods this year, as well as impress on them to move to safer places.

Mr Jonathan Hope, Disaster Manager, Ghana Red Cross Society, who briefed the Ghana News Agency after touring some of the communities, said “we do not want to record any casualties this year hence the efforts”.

Currently, the water level in the Bagre Dam stands at 234.41m.

The opening of the Bagre Dam is characterised by floods in some communities in the northern part of the country, leading to loss of lives and property, hence the Ghana Red Cross Society’s efforts to avert disaster if the Dam is opened.

Mr Hope said “We also realise that most at times, when people are displaced, they move to schools, churches, mosques and some also move to places not conducive to stay. So, we have positioned shelter kits, which they can use to repair houses that are strong but partly damaged as a result of floods.”

Mr Abdul-Rahamani Yussif, Northern Regional Manager of the Ghana Red Cross Society, said “For now, we have put in place shelter repair kits to assist people to temporarily be in their localities in the higher ground where they can make do with the make-shift buildings before the water will recede”.

He added that “Our counterparts are all ready and we are on standby and alert so that when anything happens, we should be able to do search and rescue”.