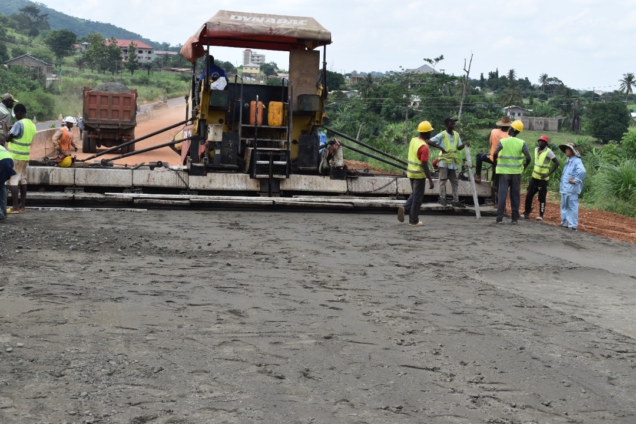 A delegation from the Ghana Road Fund Management Board of the Roads and Highways Ministry has paid a working visit to the Volta and Oti Regions to inspect road projects currently ongoing in the Regions.

Mr Afful noted that the Board of Management of the Ghana Road Fund Management aims at making sure that more roads are constructed across the country.

He added that government is doing everything possible to make sure that there is enough funding for the projects which have been delayed due to certain unforeseen setbacks.

With regards to the bridges, he said the contractors are currently working on the sub-structures and metal overlay which will also be completed in no time.

Mr Afful noted that there is the need to make sure that projects by government that have been awarded on contract are completed on time so that the beneficiary communities can have some level of relief on the works of the government.

“It is important that as a nation with a common goal of development, we are able to ensure that all government projects awarded on contract are completed within the specified period without undue delay to the detriment of beneficiary communities,” Mr. Afful said.

He lamented on how some contractors deliberately delay projects that had been awarded them for no apparent reasons, a situation he said needed to be checked urgently.

He noted that the practice of some contractors abandoning projects have really affected the development of the country.

Mr. Afful assured the people of both Oti and Volta regions that all roads and bridges started will be completed on time and to their satisfaction and that all stalled projects would be repackaged and rewarded in due time.

He thanked the Volta Regional Minister, Dr. Archibald Letsa, chiefs and people in the region for their patience with the government to bring the needed development to the region.