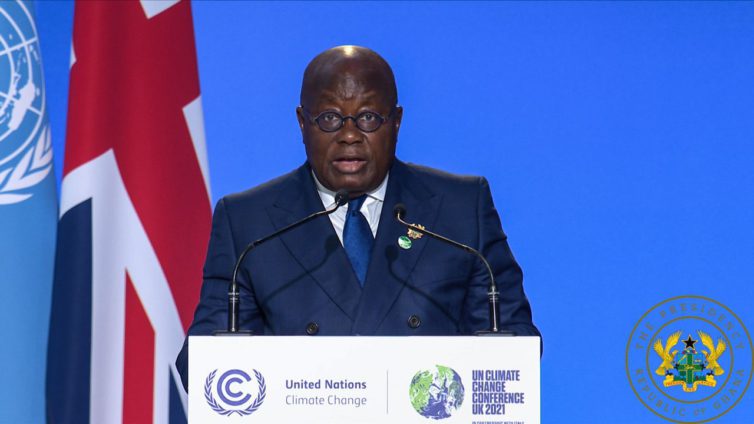 President Akufo-Addo has announced that Ghana will plant a minimum of 20 million trees in 2022 as part of plans to restore depleted forests and forest reserves.

According to him, embarking on aggressive afforestation will not only help to protect forests and the environment but also help mitigate the effect of climate change in Ghana.

Speaking at the ongoing UN Climate Change Conference in Glasgow, President Akufo-Addo said “under the National Forest Plantation Development Program and the Ghana Forest Plantation Strategy, some 580,000 hectares plantations have been established.”

He stated that “again, through the youth in afforestation program, we are committed to reclaiming some 7.6million hectares of degraded forest and farmlands. Next year we aim to plant a minimum of 20 million trees and we have already begun earnest preparation towards this.”

In June 2021 government embarked on an ambitious plan to plant five million trees across the country.

The President at the time noted that illegal mining has left detrimental effects on the environment. As such, all and sundry must support to regain the enormous forest cover that the nation had some decades ago.

Highlighting the importance of trees, the President stressed that the survival of human beings is based on the existence of trees.

Millions of seedlings made up of different tree species were distributed to the 16 regions of the country as part of preparations for the Green Ghana project.

The seedlings were distributed to individual Ghanaians and organizations for the purposes of planting.

The Minister for Lands and Natural Resources, Samuel Abdulai Jinapor, described the initiative as a big investment into the country’s forestry sector.

At the UN conference, President Akufo-Addo revealed that the target set for the planting exercise in June was over 100% achieved.

He stated that his government is leading this charge to “deepen the culture of planting of trees and thereby reduce deforestation and greenhouse gas emissions and secure sustainable future for present and successive generations of Ghanaians premised on a healthy environment.”