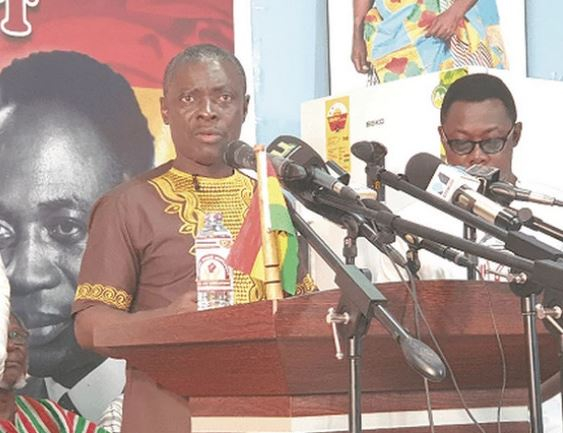 Founder and Leader of the Ghana Union Movement has outlined his strategy to deal with the effects of illegal mining.

Rev Christian Kwabena Andrew says rather than allowing only those with mining permit to mine, thereby making unpermitted mining illegal, he would decriminalise mining unlawfully.

Speaking in Akan at the launch of the 2020 manifesto, he said: “When my party comes into power, whether you have a permit or not, we will allow you to mine.

”After the mining, we will set up a group that will solely be responsible for planting trees, using excavators to level the ground and cover the soil,” he added.

In this way, by the time the younger generation will grow, the trees would have matured for them to also cut down and use the revenue generated to live their lives, he said.

Speaking on other issues, Rev Andrew said a potential government led by him would institute monthly stipends for every citizen above 60 years, irrespective of their profession.

It should have been the case that, when the person gets up at the end of the month, he is given something by government for food. But it is now limited to just government workers and that must be cancelled. Everybody who is a Ghanaian who is above 60, irrespective of your occupation must be given money by government, he said in Akan.

He said the initiative and other ones would be funded from visa fees Ghanaians pay to foreign missions to visit those countries but are denied such visas.

They take our money and spend it. But when we come to power we will sit with them and let them know that we are also going to put up our own visa centre in the middle of town, we will ask what their requirements are and apply on behalf of our people, but if the visa is not granted then we will also not pay them any money, he explained.