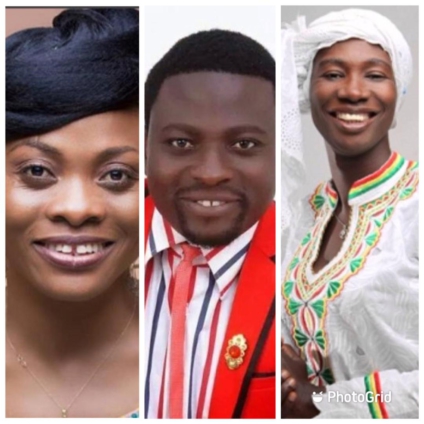 Ghanaian gospel artiste, Evangelist Diana Asamoah, has called on all fellow gospel artistes not to entertain any so-called prophecies from Cecilia Marfo that seek to embarrass them.

Instead, she advised them to give the self-styled prophet a dirty slap and even go as far as wringing her neck with a microphone cable if ever she comes towards them on stage to “prophesy”.

Her statement precedes a video that went viral over the weekend about Cecilia Marfo in a so-called prophetic move, in which she stomped onto a stage Joyce Blessing was performing on and snactching her from her hands.

Madam Marfo then went on to command Joyce Blessing to her to return to her husband under the threat of her life.

In a self-recorded video, Diana Asamoah descended heavily on Cecilia Marfo for embarrassing her colleague Joyce Blessing under the supposed influence of the Holy Spirit.

Diana Asamoah accused Cecilia Marfo of idol worship and urged all musicians to resist any such attempts by her in the future.

The gospel evangelist further stated that Madam Marfo’s actions are in a bid for her to trend, however, if she had been in Joyce Blessing’s shoes that day, both she and Cecilia would have trended from Ghana to Kosovo.

She also hinted that Cecilia Marfo was not mentally sound and was also using another ‘spirit’ other than the Holy Spirit in her ministry.

Since the video of Cecilia and Joyce went viral, social media users, as well as other gospel artistes in the industry have condemned the act.

DISCLAIMER: The Views, Comments, Opinions, Contributions and Statements made by Readers and Contributors on this platform do not necessarily represent the views or policy of Multimedia Group Limited.
Tags:
Bro Sammy
Cecila Marfo
Diana Asamoah