Government should declare a state of emergency in Keta – Kwame Gakpey - MyJoyOnline.com

Government should declare a state of emergency in Keta – Kwame Gakpey 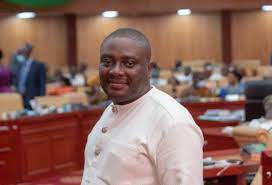 Kwame Gakpey is Member of Parliament for Keta.

The Member of Parliament for Keta, Kwame Gakpey has bemoaned government’s approach in responding to the plight of victims of Keta tidal wave.

Addressing the media at Parliament, the legislator said government must take prompt action and declare a state of emergency in Keta, Ketu South and Anlo.

“The President will be travelling to Cape Verde to go and witness presidential swearing-in when the people of Keta at the coast are devastated. Instead of a government which should take prompt action and visit the people, they are going to ceremony. They are going to climax ceremony when people are dying.

“State of Emergency in Keta, Ketu South and Anlo should be declared but here we are today. The relief item is supposed to be prompt and swift, nothing is happening. And we are raising this germane issue and then you say that this has been happening long ago,” he said.

But the Volta Regional Minister, Dr. Archibald Letsa in an interview with Evans Mensah on JoyNews argued that declaring a state of emergency will be uncalled for considering the current situation of the disaster.

He added that government is making plans to send delegation to Keta to support the victims with the needed assistance.

“I think that as at now, the situation now is much much better than it was on Sunday so we may not recommend any drastic measures as at now. All that we have to do is to continue to support them with the relief items and find a lasting solution to the problem that the people are facing.

“I spoke with the Information Minister yesterday and an arrangement is being made from Accra to visit the affected areas. I am of the opinion that the most important thing is to address the need of the people, to provide the relief items to the people, I think that is my priority.

Meanwhile the Member of Parliament for Ketu South, Dzifa Gomashie has called on the government to provide urgent solution to the problem.

She also demanded that the government should as a matter of urgency provide relief assistance to the victims.

The tidal waves which swept some communities in the Keta, Ketu South and Anlo municipality in the Volta Region has destroyed more than 200 homes and displaced over 4000 residents.

Several residents have had their livelihoods destroyed as a result of the wave.

The National Disaster Management Organization (NADMO) has presented some relief items to residents in the Keta Municipality.